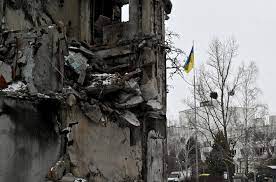 KYIV (AP): A series of explosions rocked Kyiv on Saturday morning and minutes later air raid sirens started to wail as an apparent missile attack on the Ukrainian capital was underway.

Kyiv’s city military administration said that an unidentified object of infrastructure was hit in the city and emergency services were operating at the site of the strike.

Kyiv mayor Vitali Klitschko said that explosions were heard in the Dniprovskyi district of the city and that fragments of a missile fell on a non-residential area in the Holosiivskyi district. No casualties have been reported so far.

It wasn’t immediately clear whether several facilities in Kyiv were targeted or just the one that was reported hit. The Ukrainian capital hasn’t been attacked with missiles since New Year’s night.

In the outlying Kyiv region, a residential building in the village of Kopyliv was hit, and windows of the houses nearby were blown out, Tymoshenko said.

Oleh Syniehubov said Russian forces fired two S-300 missiles at the industrial district of Kharkiv. The extent of the damage from the strike wasn’t immediately clear, but no casualties have been reported.