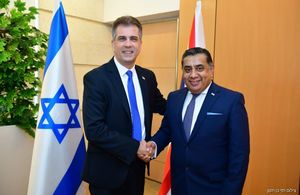 LONDON: Lord Ahmad, the UK’s Minister of State for the Middle East, North Africa, South Asia, the UN and the Prime Minister’s Special Representative on Preventing Sexual Violence in Conflict, has undertaken a two-day official visit to Israel during which he met interfaith leaders, members of the tech sector and held bilateral talks with Government of Israel Ministers.

On Tuesday, the Minister visited Ahmadia Mosque, where he met with Imam Mohammad Sharif Oudeh, Rabbi Golan Ben Horin, Reverent Hatim Shihade, Sheikh Kassem Bader, Haifa’s Mayor Einat Kalish Rotem, and discussed co-existence in Haifa. Lord Ahmad then continued on a tour to the Baha’i Gardens, to hear about the history of the Baha’i faith and the role Haifa has played as the heart of the Baha’i community.

The Minister visited the Technion – The Israeli Institute of Technology – where he was briefed about Israel’s top tier scientific innovation. He was hosted by Professor Hosam Hayek, a recipient of the BIRAX grant for UK-IL scientific collaborations, who presented the results of his research in early-stage disease detection to the Minister.

Lord Ahmad also met with leading stakeholders in the Arab-Israeli tech ecosystem before visiting the ESIL innovation and venture lab, where he met with Moshe Kaplinsky, Chairman of Bazan Group and ESIL CEO, Amir Horowitz, who presented him with Israeli start-ups developing innovative solutions to climate challenges.

At the end of his visit, Lord Ahmad said:

I am pleased to be back in Israel and meet with members of the new government. Israel is a valued partner for the UK, and I am excited to continue strengthening our bilateral relations and trade partnership and taking it to new heights.

With counterparts, I discussed the UK and Israel’s shared security threats, including Iran’s destabilising actions in the region and Russia’s unprovoked, premeditated invasion of Ukraine.

I also encouraged all efforts to avoid provocative unilateral actions in Jerusalem and the Occupied Palestinian Territories, which only serve to undermine prospects for a lasting and peaceful solution.