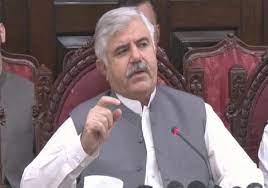 Chief Minister Khyber Pakhtunkhwa Mahmood Khan formally approved the first-ever Khyber Pakhtunkhwa Urban Policy 2030 during a meeting of the Land Use and Building Control Council on Wednesday. According to the details, in the first phase council has approved master plans for Mardan city, Wana as well as Miran Shah and Mir Ali Urban areas in North Waziristan. As said, 16 master plans for different cities are in the pipeline that would be ready in the next few weeks to implement modern techniques for land development and introduce the newest designs and modern architectural qualities in a standard format across the KP.

Town and Urban Planning is the essence of today’s modern living that not only makes optimum and judicial use of available space but also enables governments, builders, architects, and administrators to provide maximum comforts and innovations to the community. Town Planning also helps us in the preservation of the natural environment coupled with social amenities along with economical use of available resources including drinking water, electricity, gas, and other communication and internet facilities through pooled resources and collective arrangements within a specific neighborhood.

The idea of Urban planning is not a new concept, rather the ancient Rome and the Ghandara civilizations had comprehensive sanitation systems, road lanes, and lighting arrangements in their constructions.

Unfortunately, as a nation, we could not implement those sane ideas in our everyday social life whereas our cities and towns had been shaped into wild growth and unplanned construction. Currently, all residential colonies and major cities face identical problems of sewerage, clean drinking water, ungoverned traffic, encroachment, poor construction, lack of parks and recreational places, greenery, community services, and finally the rule of the law. Meanwhile, illegal and unauthorized housing societies had grown across the country causing multiple administrative and legal issues for the governments along with turning useful cultivating land into grey structures and proposed commercial hubs. Ironically, those problems are multiplying regularly by the public while the regulators, administrators, and law enforcers have no sense of responsibility to stop this self-creation of the catastrophe by the masses.

There is no scarcity of rules and regulations, as well as government institutions to authorize and regulate construction and businesses in all major cities such as CDA, PDA, LDA, KDA and SBCA, RDA, and MTA, while numerous cantonment boards and Municipal administrations are functional in all cities and towns still illegal building, are continuously being constructed, unauthorized societies are being launched and unlawful encroachment still exists everywhere in all provinces as well as in the Federal Capital.

KP government introduced KP Land and Building Control Act in 2021 and established a new autonomous authority at the provincial level to regulate land use and implement building codes in the entire province. Previously, there are several development authorities at the district level to regulate the construction, and the Sindh Building Control and Development Authority (SBCA) was the only provincial-level institution, which has been overseeing construction in Karachi and Sindh since the 1950s. However, SBCA failed to prove its worth even in Karachi instead of the entire province. Now, the KP government has initiated a province-wide campaign to overcome the issue of bad governance. The problem lies in the no implementation of the law, no fulfillment of responsibility, and no accountability of the corrupt, criminals, and crooks. Until and unless government officials and the public do not uphold the constitution and merit, no change can be brought in this country through multiple institutions and volumes of legislation.