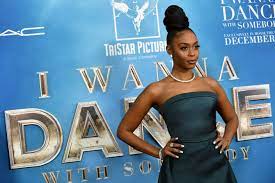 The “Streets” star wore the celebrity-loved orange asymmetric purse called Ghalia. Designed with a croc-embossed faux leather texture, the geometric, rectangular bag features two chains — one made of agate stones and the other a dainty gold chain.

The Ghalia clutch was previously worn by US reality TV star and beauty mogul Kylie Jenner in 2020 and US model Sofia Richie in 2021.

Williams wore the bag to in New York City as she promoted her upcoming film “Whitney Houston: I Wanna Dance With Somebody,” which will be released on Dec. 22 in the Middle East.

The film is a biographical musical film based on the life of US pop singer Whitney Houston.

“It’s almost time y’all,” the 33-year-old actress wrote on Instagram this week as she teased the release of her new film. “God only knows my gratitude and excitement for this movie and I can’t wait for y’all to see it.”

Williams has been wowing her social media fans with her looks while on the press circuit for the new film.

The movie premiered on Dec. 13 in New York City and Williams stepped out on the red carpet in an emerald green dress from Italian fashion label Giorgio Armani.

The marketing graduate, who hails from a family who have been in the leather-manufacturing business for decades, has released five handcrafted collections to date — Ghalia is part of the fifth collection — and is preparing to launch her first footwear line soon.

“I always dreamed that one day Aliel would be celebrated globally,” Abo Tira told Arab News in a previous interview.

And it appears that the dream has come to fruition as the rising Egyptian label has been championed by a number of global superstars like Jenner and Richie.

The label’s luxurious designs have also been sported by US actress Joey King, American author Elaine Welteroth and Egyptian model and actress Salma Abu Deif, to name a few.