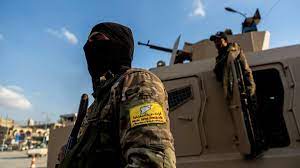 WASHINGTON: The U.S. Department of the Treasury’s Office of Foreign Assets Control (OFAC) designated critical nodes of a key financial facilitation network of the Islamic State of Iraq and Syria (ISIS), which included four individuals and two entities in Türkiye, who have enabled the terrorist group’s recruitment and financial transfers to and from Iraq and Syria. This network played a key role in money management, transfer, and distribution for ISIS in the region. Concurrently, the Turkish Ministry of Treasury and Finance, together with the Ministry of Interior, have implemented an asset freeze against members of this network.

“Today’s action reaffirms Treasury’s commitment to degrade ISIS’s ability to operate globally,” said Under Secretary of the Treasury for Terrorism and Financial Intelligence Brian E. Nelson. “These designations and accompanying asset freezes are a result of close coordination and collaboration with our Turkish partners to target ISIS activity in the region.”

This follows OFAC’s November 7, 2022 designation of four individuals and eight companies as part of an ISIS cell in South Africa, which was providing technical, financial, or material support to the terrorist group. These individuals and entities are being designated pursuant to Executive Order (E.O.) 13224, as amended, which targets terrorist groups and their supporters.

Abd Al Hamid Salim Ibrahim Ismail Brukan al-Khatuni (Brukan al-Khatuni) is an Iraqi national illegally living in Türkiye, who has engaged in financial facilitation and recruitment activities for ISIS. Brukan al-Khatuni has played a significant role in transferring funds through his network in support of ISIS and ISIS senior leaders.

Abd Al Hamid Salim Ibrahim Ismail Brukan al-Khatuni is being designated pursuant to E.O. 13224, as amended, for having materially assisted, sponsored, or provided financial, material or technological support for, or goods or services to or in support of, ISIS.

Wadi Alrrafidayn for Foodstuffs is being designated for being owned, controlled, or directed by, directly or indirectly, Brukan al-Khatuni.

ISIS financial facilitators also used Sham Express to support the smuggling of gold from Syria and Sudan via Iraq, Egypt, and Libya to generate additional revenue for ISIS. Sham Express is being designated pursuant to E.O. 13224, as amended, for having materially assisted, sponsored, or provided financial, material or technological support for, or goods or services to or in support of, ISIS.

Lu’ay Jasim, previously an al-Qa’ida member since 2008, joined ISIS in 2014 and worked in ISIS’s financial administration for several years until he moved to Mersin, Türkiye, where he managed a business used by ISIS members in Türkiye to illegally transfer funds throughout the region, notably Iraq and Egypt.

Lu’ay Jasim Hammadi al-Juburi is being designated pursuant to E.O. 13224, as amended, for having materially assisted, sponsored, or provided financial, material or technological support for, or goods or services to or in support of, ISIS.

As a result of today’s action, all property and interests in property of the persons named above, and of any entities that are owned, directly or indirectly, 50 percent or more by them, individually, or with other blocked persons, that are in the United States or in the possession or control of U.S. persons, must be blocked and reported to OFAC. Unless authorized by a general or specific license issued by OFAC or otherwise exempt, OFAC’s regulations generally prohibit all transactions by U.S. persons or within the United States (including transactions transiting the United States) that involve any property or interests in property of designated or otherwise blocked persons. The prohibitions include the making or receiving of any contribution of funds, goods, or services to or for the benefit of those persons.

Furthermore, engaging in certain transactions with the persons designated today entails risk of secondary sanctions pursuant to E.O. 13224, as amended. Pursuant to this authority, OFAC can prohibit or impose strict conditions on the opening or maintaining in the United States of a correspondent account or a payable-through account of a foreign financial institution that has knowingly conducted or facilitated any significant transaction on behalf of a Specially Designated Global Terrorist (SDGT).

The power and integrity of OFAC sanctions derive not only from its ability to designate and add persons to the List of Specially Designated Nationals or Blocked Persons (“SDN List”), but also from its willingness to remove persons from the SDN List consistent with the law. The ultimate goal of sanctions is not to punish, but to bring about a positive change in behavior. For information concerning the process for seeking removal from an OFAC list, including the SDN List, please refer to OFAC’s Frequently Asked Question 897