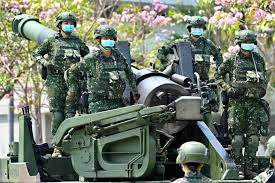 WASHINGTON (Reuters): The US State Department has approved the possible sale of Volcano anti-tank mine-laying systems to Taiwan for an estimated $180 million, the Pentagon said on Wednesday.

Northrop Grumman and Oshkosh Corporation are the prime contractors for the potential sale.

US law requires the executive branch to notify Congress of potential arms sales that are over a certain amount. But these notifications are usually not made unless lawmakers have given the State Department and Pentagon informal approval to move ahead.

The potential deal comes as China ramps up military, diplomatic and economic pressure on Taiwan to assert its sovereignty claims, including almost daily Chinese air force missions near the island during the past three years.

Taiwan’s defense ministry said in a statement that the sale would take effect in about a month and that the system would help boost the island’s “asymmetric warfare” capacity to make its forces more agile.

“The Chinese Communist Party’s frequent military activities near Taiwan have posted severe military threats to us,” the ministry said, adding that continuous US military sales are the “cornerstone of maintaining regional stability and peace.”

The United States is Taiwan’s strongest international backer and main source of arms, which angers China.

China claims self-governed Taiwan as its own territory and vows to take the island by force, if necessary. Taiwan strongly rejects Beijing’s sovereignty claim and says it will defend itself if attacked.