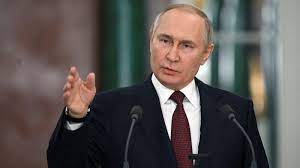 WASHINGTON (AFP): The United States on Friday derisively called on Russian President Vladimir Putin to acknowledge reality and pull troops from Ukraine after he finally called the conflict a “war.”

Since Putin ordered the invasion in February, Russia has officially spoken of a “special military operation” and imposed a law that criminalizes what authorities call misleading terminology.

But at a news conference on Thursday, Putin himself used the word “war” as he said that he hoped to end it as soon as possible.

“Since February 24, the United States and rest of the world knew that Putin s  special military operation  was an unprovoked and unjustified war against Ukraine. Finally, after 300 days, Putin called the war what it is,” a State Department spokesperson said.

“As a next step in acknowledging reality, we urge him to end this war by withdrawing his forces from Ukraine.”

The State Department said that, whatever Putin s terminology, “Russia s aggression against its sovereign neighbor has resulted in death, destruction and displacement.”

“The people of Ukraine no doubt find little consolation in Putin stating the obvious, nor do the tens of thousands of Russian families whose relatives have been killed fighting Putin s war.”

A Russian court earlier this month sentenced an opposition politician, Ilya Yashin, to eight and a half years in prison under the new law over his “false information” about the war.

Yashin had spoken of a “massacre” in Bucha, the town near Ukraine s capital Kyiv where the bullet-ridden bodies of Ukrainians in civilian clothes with hands tied behind their backs were discovered after Russian forces retreated.

An opposition lawmaker critical of the invasion, Nikita Yuferev, on Friday said he was seeking legal action against Putin for spreading “fake news” over his “war” reference.