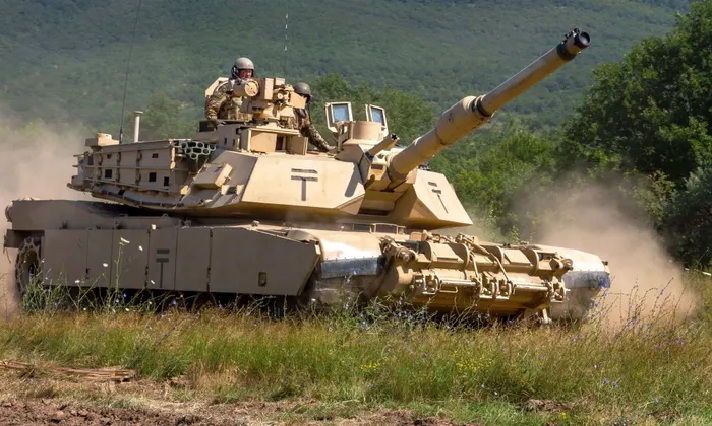 WASHINGTON (Agencies): Joe Biden has approved sending 31 M1 Abrams tanks to Ukraine, a significant escalation in the US effort to counter Russian aggression as international reluctance to send tanks to the battlefront falls away.

The reversal of the US’s previous position came after Germany confirmed it will make 14 of its Leopard 2A6 tanks available for Ukraine’s war effort, and give partner countries its permission to re-export other battle tanks to aid Kyiv.

By agreeing to send the Abrams, the US is able to meet the demand of the German chancellor, Olaf Scholz, for an American commitment but without having to send the tanks immediately.

Biden added: “We remain united and determined as ever in our conviction and our cause. These tanks are further evidence of our enduring, unflagging commitment to Ukraine and our confidence in the skill of the Ukrainian forces.”

Earlier, the president had spoken by phone with president Emmanuel Macron of France, Scholz of Germany, prime minister Giorgia Meloni of Italy and prime minister Rishi Sunak of Britain. Biden said: “Germany has really stepped up. The chancellor’s been a strong, strong voice for unity.”

In public statements, Washington and Berlin had denied any connection between their respective decisions on tanks, although media reports said German officials had made clear in private that the Leopards were conditional on the US making a similar commitment.

Berlin’s hesitant stance on the battle tank question had caused disquiet among its western allies, and puzzlement in Germany in recent days. Critics in Scholz’s own governing coalition accused his chancellory of being paralysed by inner-party conflicts.

Scholz confirmed that the country will initially supply 14 Leopard 2 tanks along with ammunition and logistical and maintenance support. He said in a statement: “This decision follows our well-known line of supporting Ukraine to the best of our ability. We are acting in a closely coordinated manner internationally.”

Germany will also approve other European countries supplying German-made Leopard 2 tanks from their own stock. Poland has requested approval to send some of its Leopards to Ukraine.

Norway also announced that it will send Leopard 2 battle tanks to Ukraine as part of Western aid. Defence minister Bjørn Arild Gram said in an interview with Norwegian public television NRK: “Norway and the government support the donation of battle tanks to Ukraine. Norway will take part.” He did not specify how many would be sent.

Russia denounced the American and German initiatives as “a rather disastrous plan”. Dmitry Peskov, a Kremlin spokesperson, said: “The main thing is, this is a completely obvious overestimation of the potential [this] would add to the armed forces of Ukraine. It is yet another fallacy, a rather profound one.”

But the announcements comes as a significant boost for Ukraine, which has pleaded with western allies for months to send battle tanks as it seeks to reclaim territory and braces for a potential new Russian offensive in the spring.

Much of the US aid sent so far in the 11-month-old war has been through a separate programme drawing on Pentagon stocks to get weapons more quickly to Ukraine. But even under that programme, it would take months to get tanks to Ukraine and to get Ukrainian forces trained on them.

Ukraine says heavily armoured western battle tanks would give its troops more mobility and protection before a Russian offensive that Kyiv expects in the near future. They could also help Ukraine retake some of the territory that has fallen to Russia.

But until now, the US has resisted providing its own M1 Abrams tanks to Ukraine, citing extensive and complex maintenance and logistical challenges with the hi-tech vehicles.

US officials had said that the Abrams was tough to maintain, hard to train Ukrainians to operate, and ran on jet fuel – making it a poor choice for this phase of the war.

Brig Gen Pat Ryder, a Pentagon spokesperson, told reporters on Tuesday: “The M1 is a complex weapons system that is challenging to maintain … that was true yesterday, that is true today and will be true in the future.”

Washington had argued it would be more productive to send German Leopards since many allies already have them and Ukrainian troops would need less training than on the more difficult Abrams.

Biden, flanked by secretary of state Antony Blinken and defense secretary Lloyd Austin, said Austin had recommended this step. “The Abrams tanks are the most capable tanks in the world.

“They’re also extremely complex to operate and maintain so we’re also giving Ukraine the parts and equipment necessary to effectively sustain these tanks on the battlefield and we’ll begin to train Ukrainian troops on these issues of sustainment, logistical and maintenance as soon as possible.”

But the president acknowledged that delivering the tanks to the field will “take time”. In a conference call with reporters, a senior administration official said such training would take place outside Ukraine.

Domestically, Biden’s move offers a new test of bipartisan support in Congress for the open-ended Ukraine commitment. It was welcomed by Mitch McConnell, the Republican minority leader in the Senate, who said: “Modern main battle tanks will provide highly maneuverable, armored firepower that will help Ukraine liberate territory and keep pressure on the Russian aggressors, but time is of the essence.”