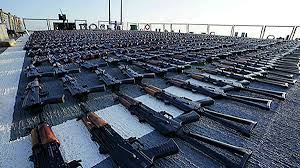 DUBAI (AP): The US Navy seized over 2,100 assault rifles from a ship in the Gulf of Oman it believes came from Iran and were bound for Yemen’s Iranian-backed Houthi rebels, a Navy spokesman said Tuesday. It was the latest capture of weapons allegedly heading to the Arab world’s poorest country.

The seizure last Friday happened after a team from the USS Chinook, a Cyclone-class coastal patrol boat, boarded a traditional wooden sailing vessel known as a dhow. They discovered the Kalashnikov-style rifles individually wrapped in green tarps aboard the ship, said Cmdr. Timothy Hawkins, a spokesman for the Navy’s Mideast-based 5th Fleet.

The Chinook, along with the patrol boat USS Monsoon and the guided missile destroyer USS The Sullivans, took possession of the weapons. They resembled other assault rifles previously seized by the Navy, suspected to be from Iran and heading to Yemen.

“When we intercepted the vessel, it was on a route historically used to traffic illicit cargo to the Houthis in Yemen,” Hawkins told The Associated Press. “The Yemeni crew corroborated the origin.”

The Yemeni crew, Hawkins added, will be repatriated back to a government-controlled part of Yemen.

A United Nations arms embargo has prohibited weapons transfers to the Houthis since 2014, when Yemen’s civil war erupted.

Iran has long denied arming the Houthis even as it has been transferring rifles, rocket-propelled grenades, missiles and other weaponry to the Yemeni militia using sea routes. Independent experts, Western nations and UN experts have traced components seized aboard other detained vessels back to Iran.

Iran’s mission to the United Nations did not immediately respond to a request for comment Tuesday.

The Houthis seized Yemen’s capital, Sanaa, in September 2014 and forced the internationally recognized government into exile. A Saudi-led coalition armed with US weaponry and intelligence entered the war on the side of Yemen’s exiled government in March 2015. Years of inconclusive fighting has pushed the Arab world’s poorest nation to the brink of famine.

A six-month cease-fire in Yemen’s war, the longest of the conflict, expired in October despite diplomatic efforts to renew it. That’s led to fears the fighting could again escalate. More than 150,000 people have been killed in Yemen during the conflict, including over 14,500 civilians.

There have been sporadic attacks since the cease-fire expired, though international negotiators are trying to find a political solution to the war.

In November, the Navy found 70 tons of a missile fuel component hidden among bags of fertilizer, also allegedly from Iran and bound to Yemen.