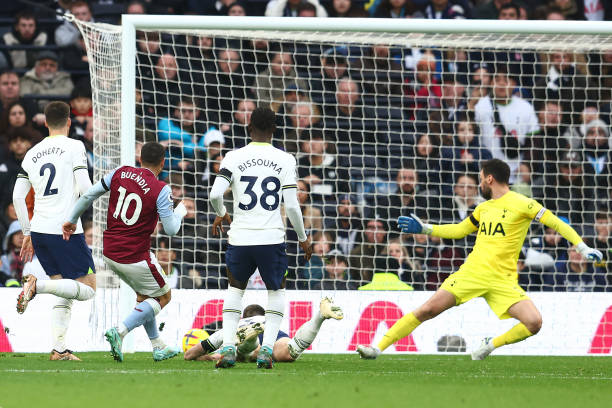 An error by goalkeeper Hugo Lloris in his first game back since the World Cup allowed Emiliano Buendia to score before Douglas Luiz doubled the lead.

A lacklustre Spurs, who fell out of the Premier League top four on Saturday, have now won only two of their past seven matches.

Villa have won back-to-back away league games as they improve under Unai Emery.

It appeared this contest would pit the two keepers who faced off in the 2022 World Cup final penalty shootout against each other, but Argentina’s spot-kick hero Emiliano Martinez had to settle for a place on the Villa bench.

It was a poor match all round for returning finalists. Spurs’ World Cup-winning defender Cristian Romero was shown a yellow card in the first half – and fortunate not to get a second late on after barging Philippe Coutinho – while Lloris endured a shocking moment in the 50th minute.

He spilled Luiz’s long-range effort and Ollie Watkins squared the rebound for Buendia to slam home.

Luiz started and finished the move for 2-0, sliding a pass to John McGinn before racing on to receive the return and chipping cutely past Lloris.

Having lost their place in the top four to Manchester United, the onus was on Tottenham to produce an improved performance.

While they did improve on their previous five games by not trailing at half-time, Spurs continue to look disjointed, exemplified after 18 minutes when Son Heung-min ripped off the protective mask he wore throughout the World Cup and threw it away in frustration.

Striker Harry Kane also cut an irritated figure, coming deep into midfield to get the ball after barely touching it in the early periods.

The England captain came closest to opening the scoring in the first half.

Ivan Perisic was played in over the top before being forced wide by keeper Robin Olsen, but he cleverly dinked a cross back over for Kane to head down. Ashley Young covered, having initially played Perisic onside, and managed to direct the effort behind for a corner.

Perisic should have scored shortly after Buendia’s opener when the ball fell kindly 15 yards out and he scooped over the bar.

They looked toothless in attack – Bryan Gil made his first league start in place of the injured Dejan Kulusevski, but was replaced just past the hour following an anonymous display – and Conte looked more miserable as his side slipped towards another worrying defeat.

While Emery’s reign at Arsenal was not a success, he did manage to get the better of Tottenham – going unbeaten in three games against their local rivals.

He continued that trend on Sunday, a solid defensive performance justifying the decision to leave a World Cup winner on the bench.

Martinez’s heroics in Qatar were not enough to unseat Olsen as Emery named an unchanged team from the side that lost to Liverpool on 26 December.

He was rewarded. Watkins and Buendia were bright to pounce on the opening Lloris handed them, while Luiz controlled midfield and deserved his goal.

They ensured Emery became the first Villa manager since John Gregory in 1998 to win his first two Premier League away matches.

The Spaniard also set a record of 55 Premier League games in charge without being involved in a goalless draw, surpassing former Spurs boss Ossie Ardiles.