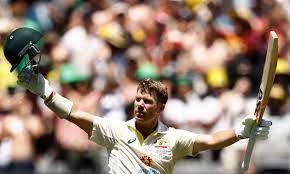 Melbourne (AFP): Pugnacious opener David Warner battled through searing heat to hit an unbeaten 135 in his 100th Test on Tuesday, passing 8,000 Test runs in the process, as Australia stretched their advantage against South Africa at the Melbourne Cricket Ground.The hosts were 231-2 at tea on day two of the second Test, leading by 42 after the Proteas were dismissed in their first innings for 189.

Warner snapped a near-three-year century drought in typically aggressive and gritty fashion, reaching three figures for a 25th time after coming into the game under pressure after a lean run. It was his first Test hundred since January 2020 against New Zealand in Sydney.
Fellow veteran Steve Smith was not out 60.

Their 156-run partnership took the game further away from South Africa, whose bowlers toiled in temperatures touching 37 degrees Celsius (98.6 Fahrenheit) with the wicket of Marnus Labuschagne for 14 their only reward.

It was so hot that chairs were brought out for Warner and Smith to sit on in the afternoon drinks break, with towels draped over their heads and water splashed on their faces.

Warner also needed treatment for cramp. Australia resumed on 45-1, having lost Usman Khawaja late Monday after taking charge of the opening day, with Cameron Green’s career-best 5-27 helping dismiss the visitors for under 200 once again.

The Proteas were all out for 152 and 99 in the first Test in Brisbane, which they lost by six wickets inside two days, with the fragility of their batting on full display.

Warner began on 32 after an attacking start during the final hour on Monday and continued the aggression with an early boundary off Kagiso Rabada.

Anrich Nortje was routinely sending down 150 kph (93 mph) rockets, smacking Warner on the head when he was on 47. The batter was given the all-clear after a mandatory concussion test on the field, with a lengthy delay as a new helmet was found. Disaster struck two balls after play resumed.

Warner pushed Nortje for a single and came back for a second, but Labuschagne hesitated and was run out on 14 despite a lunging dive.
Unfazed, Warner put his head down to motor to 100, punching the air and saluting the crowd when he got there with a boundary after a near-flawless knock characterised by his trademark strong running between the wicket.

Smith was not as comfortable, escaping on nine when he was dropped by wicketkeeper Kyle Verreynne and then on 39 when he was given out caught behind only for it to be called a no-ball after Rabada overstepped

the mark. But Smith persevered to reach a 37th Test half-century with a four off Marco Jansen.