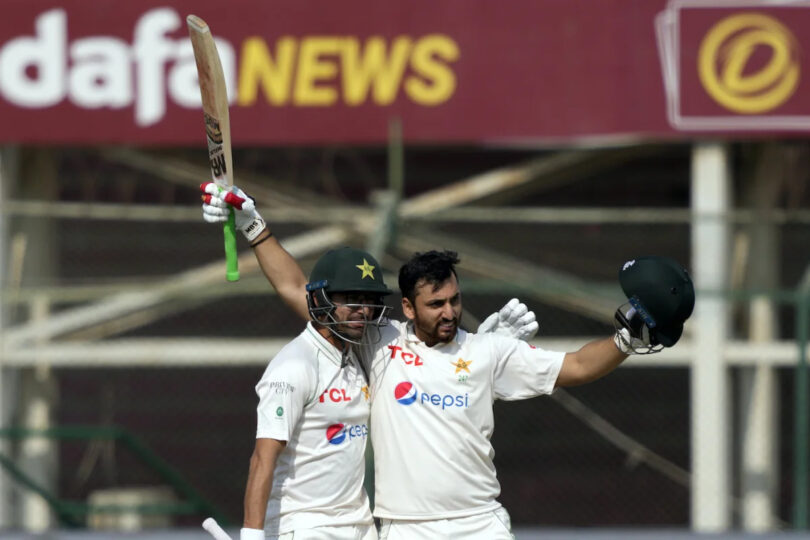 KARACHI: Devon Conway and Tom Latham added 165 unbeaten runs in New Zealand’s highest opening stand in Tests in Pakistan – they went past the previous best of 136 set way back in 1965 – as the hosts toiled hard on a Karachi pitch which seemed to have eased out enough for steady run-scoring.

It was mostly a chanceless partnership throughout; the fact that Babar Azam himself came on to roll his arm over as stumps approached was an indication of how dominant was the batting and how ineffective the bowling was, having also bowled the final over before tea. New Zealand’s deficit was down to 273 after Agha Salman’s maiden Test century earlier in the day had pushed Pakistan to 438.

On the way to an undefeated 82, Conway also became the fastest New Zealand batter to 1000 Test runs, getting there in 19 innings. Although both he and his partner are both left-handed, they present entirely different problems for bowlers when they’re at the crease together. As if to exemplify this fact, on Tuesday, both of them scored the exact same proportion of their runs – one-third – in diametrically opposite directions. Conway in the arc between point and long-off and Latham between fine leg and midwicket.

Pakistan started the evening session with spin from both ends, as Nauman Ali aimed for the rough outside the batters’ off stump, while Abrar Ahmed mixed things up with his variations. And though there was enough turn to keep things interesting, with the odd ball scuttling through at ankle-height, the breakthrough they were striving so hard for never came.

Conway often took a big stride forward to smother the spin, and even used the reverse sweep to hit two boundaries, while also driving and slashing each time the bowlers went too full or too wide. Latham, on the other hand, relied on the conventional sweep and the flick, getting 40 of his 78 runs through those shots.

Pakistan could have broken the partnership at 105 in the 31st over when Conway inside-edged a ball from Nauman through to the wicketkeeper. Except it all looked very innocuous and seemed like the right decision was made when the umpire ruled not-out. After all, Sarfaraz Ahmed was the only one to appeal – and even that was half-hearted. But then came the replays which showed evidence of a nick.

Although not everything went to plan, Pakistan still have plenty to play with and that’s largely down to Salman, who hit 103 off 155, piling on quick, useful runs with the tail. Pakistan’s last four wickets fetched 120 runs, with Salman scoring 99 of those in partnerships of 54 with Nauman, 39 with Mir Hamza and 24 with Abrar.

Salman had started the afternoon session unbeaten on 54, with Hamza for company. He racked up his last 49 runs from just 45 balls, smashing ten fours to ensure Pakistan crossed the 400-run mark. Salman attacked Neil Wagner, often making room to swat or pull his short deliveries. And when Wagner tried something different, Salman hit three fours in the 125th over: swung to deep square leg, lofted over extra cover off a full length, and slapped to deep point when the left-arm quick went for a slower ball.

Confident of his aggressive strokes, Salman reverse swept Ish Sodhi a few times, before raising his century off a pull when the legspinner pitched it short and outside leg. Eventually, Tim Southee trapped him in front when the batter tried to hoick across the line but missed.
Southee had also dismissed Babar for 161 with the fourth ball of the day before a dull period in the morning followed. The visitors struck late twice though. That quietened things to the extent that Salman and Nauman went 28 deliveries without scoring, starting with the third ball of the 95th over.

Nauman got off the mark off his sixth delivery, but waited until his 48th to produce his next scoring shot, a slog sweep off Ajaz Patel for four. Salman kept things ticking at the other end. New Zealand thought they had him on 36 when they challenged Aleem Dar’s not-out decision for a leg-before appeal. But replays showed Sodhi’s googly was turning in enough to miss leg stump.

New Zealand finally broke the frustrating stand which lasted more than 26 overs, when Wagner, brought into the attack with the short-ball ploy in mind, sent Nauman back just before lunch. Michael Bracewell at a short square leg plucked a catch leaping to his left as Nauman tried to pull a rising delivery, before Sodhi got his first Test wicket in four years when Wasim tried a funky scoop shot to a short ball, only for the ball to pop up and into Tom Blundell’s gloves. (Cricinfo)