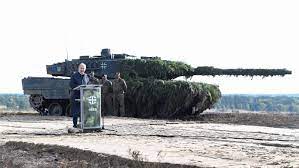 BERLIN (Reuters): German Chancellor Olaf Scholz is under pressure to approve an increase in international military support for Kyiv by allowing the export of Leopard 2 battle tanks to Ukraine. Germany has resisted such a move so far, saying Western tanks should only be supplied to Ukraine if there is agreement among Kyiv’s main allies, particularly the United States.

Western officials want to strike a balance between ensuring Ukraine can defend itself and not supplying arms that could encourage Kyiv to make attacks on Russia or draw NATO into conflict with Moscow. Here are some facts about the Leopard 2 and the debate over whether to deploy it in Ukraine. The re-export of Leopards requires German government approval, so other countries with such tanks could not send them to Ukraine without it.

Some German officials have signalled a softening of their view ahead of a meeting of Ukraine’s allies in Ramstein in Germany where governments will announce their latest pledges of military support for Kyiv. Vice Chancellor Robert Habeck, whose Economy Ministry is responsible for approving defence exports, said Berlin should not stand in the way of countries that want to send Leopards to Ukraine. That would give the green light to countries such as Poland, which has said it wants to take such a step as part of a coalition. Scholz has yet to say whether he shares Habeck’s view or would allow Germany to send some of its own Leopards to Ukraine.

Western officials are anxious to avoid being dragged more directly into the war. While Moscow has condemned escalations in arms supplies for Ukraine, this has not led to any military consequences for the West. That has made governments more open to the idea of sending tanks. Until now, Ukraine has relied primarily on Soviet-era T-72 tank variants.

Some Western officials have flagged another concern – that Russia, or even China, might get its hands on advanced Western weaponry deployed in Ukraine, enabling Moscow or Beijing to steal Western military technology. The tank is regarded as one of the West’s best. German defence company Krauss-Maffei Wegmann has built more than 3,500 Leopard 2 tanks since beginning production in 1978.
The tank weighs more than 60 tons, has a 120mm smoothbore gun and can hit targets at a distance of up to five km. Some 20 nations operate the Leopard 2. This means several nations could each chip in some of their tanks to support Ukraine. This would also make it easier for Ukraine to manage maintenance and crew training. Nations operating the Leopard include Canada, Denmark, Finland, Netherlands, Norway, Austria, Poland, Spain, Sweden and Turkey.

The Leopard 2 is one of the most widely used Western tanks. But in general, three decades after the end of the Cold War, tanks and other heavy weapons are in scarce supply in most of the West. Many countries drastically reduced their armies after the fall of communism. Germany has about 350 Leopard 2 tanks today, compared to some 4,000 battle main tanks at the height of the Cold War, German military expert Carl Schulze says. At the same time, it is all but impossible to buy a large amount of Leopard 2 tanks quickly.

Germany’s defence industry is banned by law from producing them for stock-keeping. Countries ordering new tanks need to be prepared to wait two to three years for delivery. Even if production were ramped up, experts say it could take at least two years for the first new tanks to leave the factory. The United States operates thousands of M1 Abrams tanks built by General Dynamics but they are seen as unsuitable for Ukraine as they are driven by gas turbine engines.

“The kerosene consumption of the Abrams is so high that Ukraine does not stand a chance of operating it in the current war-time supply situation,” Schulze says. He added that, while the Abrams could also be driven with diesel, this would not bring down consumption to an acceptable level. The Leopard 2 runs on a more economical engine that burns diesel, which is also easier to obtain than kerosene. Britain is considering supplying some of its Challenger 2 tanks to Ukraine, according to media reports. France operates Leclerc tanks. It has not said whether it would be willing to give some to Ukraine.