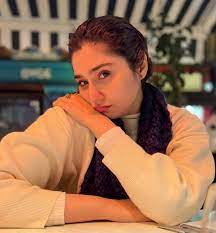 KARACHI: Pakistani actress Durefishah Saleem is vacationing in UK nowadays where she is exploring different places of the country.

The actress, without a doubt, is a foodie and loves to post her pictures while eating and trying different local cuisine of the country.

She is also an avid social media user who often shares her pictures on social media handles and keeps her fans updated about her routine.

The ‘Kesi Teri Khudgharzi’ actress took to her social media handle and posted a photo thread in which she was seen sitting in a UK bar and doing what she does best: eating.

She even captioned her pictures:

Have a look at the photo thread:

Her pictures and caption gave the impression that she didn’t really like the taste of the food. This is because she has limits when it comes to eating spicy foods and that food could be spicy or tasteless.

Her blockbuster drama ‘Kesi Teri Khudgharzi’ just ended and she took a break from work and flew to UK for a vacation where she is pulling off some chic street styles fashion.