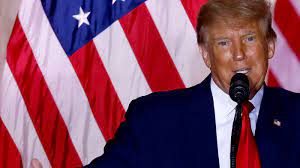 Republicans are struggling to navigate an increasingly complicated relationship with former President Trump, who has emerged from the midterms in arguably the weakest position he has been in but who remains deeply influential among the GOP’s conservative base.
After a midterm election that many Republicans saw as a rejection of Trump and his slate of chosen candidates, some party officials and operatives have begun to wonder how the GOP can move past the former president, whose dominance in Republican politics has yielded lackluster results for the party over three consecutive election cycles.
Things became even more difficult for the former president on Monday after the congressional co-mmittee investigating the Jan. 6 riot at the U.S. Cap-itol voted to refer Trump to the Justice Department for allegedly inciting an insurrection, among other potential crimes.
Doing so, however, won’t be easy. Not only does the former president still command the devotion of a loyal faction of conservative voters, but he is once again running for the White House, ensuring him a place in the national spotlight — at least for the time being.
“There are three types of people: pro-Trump people, anti-Trump people and those who just want to move on,” one Republican strategist and former GOP official said. “The difficult part, I think, is that we all have to exist in the same party. There’s gotta be some deference for President Trump, even if you’re in the camp that wants to move on.”
That doesn’t, however, make Trump untouchable. Since last month’s midterm elections, a growing chorus of prominent Republicans has placed blame on the former president for isolating moderate and independent voters, elevating untested candidates in GOP primaries and putting Republicans on the defensive in a year when they should have had the political wind at their backs.
“Our ability to control the primary outcome was quite limited in ’22 because the support of the former president proved to be very decisive in these primaries,” Senate Minority Leader Mitch McConnell (R-Ky.) told reporters last week. “So my view was do the best you can with the cards you’re dealt. Now, hopefully, in the next cycle we’ll have quality candidates everywhere and a better outcome.” At the same time, there are signs that other prospective Republican presidential contenders — most notably Florida Gov. Ron DeSantis — are gaining traction among the party’s voters, despite Trump’s best efforts to maintain his vise-like grip on the GOP.
A survey from The Wall Street Journal released last week showed DeSantis scoring 52 percent support to Trump’s 38 percent, while a USA Today-Suffolk University poll released around the same time found DeSantis leading Trump 56 percent to 33 percent in a hypothetical primary match-up.
But even if Trump fails to capture the GOP’s presidential nod, he’s not likely to disappear. Democrats still managed to effectively weaponize Trump’s controversial political brand during the 2022 midterm elections, despite the fact that he wasn’t on the ballot.
There’s also some concern among Republicans that too forcefully breaking with Trump could cause backlash, not only from his most loyal supporters, but also from the former president himself, who has a penchant to attack anyone he perceives as an enemy or rival — including those in his own party.
“Whoever gets close to him he just attacks,” said Keith Naughton, a veteran Republican strategist. “That’s been Trump’s playbook from the beginning and I don’t see that changing at all.”
Trump’s various controversies and legal problems could also make it harder for other Republicans to ignore him.
He’s facing a special counsel investigation into whether he illegally kept sensitive government documents upon leaving the White House, as well as a grand jury probe in Georgia focusing on whether he and his allies sought to overturn the results of the 2020 election.
The former president is also facing a civil suit filed by New York Attorney General Letitia James accusing Trump, his children and his company of fraud.
Then there’s the Jan. 6 committee’s decision on Monday to refer Trump to the Justice Department for potential prosecution for four alleged crimes, including inciting an insurrection, conspiracy to defraud the United States, conspiracy to make a false statement and obstruction of an official proceeding of Congress.
The criminal referrals don’t carry any legal weight; the Justice Department, which is conducting its own investigation into the Jan. 6 riot, will ultimately decide how to handle the matter. Indeed, Trump’s allies have simply cast the referrals as an act of vengeance by Democrats.
Meanwhile, the former president himself responded to the development with a warning to those who cross him. “These folks don’t get it that when they come after me, people who love freedom rally around me. It strengthens me,” Trump said in a statement posted on his social media platform Truth Social. “What doesn’t kill me makes me stronger.”