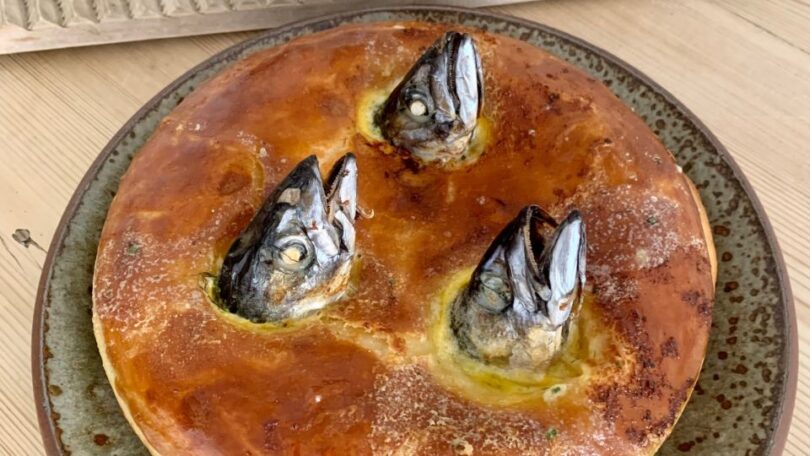 (CNN): On a hot summer day in the Cornish seaside village of Mousehole. In the kitchen of The Old Coastguard hotel, chef Jamie Porter is bent low over a bench, unfolding a marvelous fish fantasy that’s all heads, no tails.

He’s shoving mackerel noggins into slits in a pastry lid, tweaking bulging eyeballs so that they stare straight into the sky, egging crust with soft strokes as if it’s a Franciscan fresco.

“There weren’t many things I had to agree to do when I joined this company,” Porter confides, tucking a gaping fish lip into a rapacious jaw socket, “but making Stargazy Pie was one of them.”

Porter hails from Padstow, a town on the northern coast of Cornwall, the southwestern tip of the UK which points out into the Atlantic Ocean. Mousehole, a tiny fishing port, sits on Cornwall’s southern coast.

He’s perhaps used to more refined cuisine, having trained both with British TV chef Rick Stein at the celebrated Seafood Restaurant in Padstow and at the Waterside Inn in Berkshire, west of London, alongside internationally renowned chef-patron Alain Roux.

But watching Porter at work on this cannot but inspire awed reverence. Particularly if you’ve just persuaded him to make this fantastical fish pie months before the one day of the year it’s supposed to be eaten – December 23, at the festival of Tom Bawcock’s Eve.

Beneath the pastry, Porter has packed a rich, buttery roux with smoked haddock, hake, cod, mackerel and herbs. The sand eels, pilchards, ling and dogfish are missing on this occasion, but everything depends upon the season. Occasionally, Porter upgrades the recipe, throwing in lobster and mussels and monkfish, maybe even mushrooms.

The pie is out of the oven, 20 minutes later, dead heads gasping to escape pastry and six entreating eyeballs gazing whitely at the ceiling.

It’s cut, crackling crisp, oozing a deliciously salty, buttery, custard of sea flavors into my mouth. Porter seems oblivious to the effect of the pie (unfairly maligned by The New York Times as “nasty with unpredictability”) because he’s already hooked onto another idea.

“You could get rid of the milk and cream,” he suggests. “It would be lovely to reduce it down with lime and chili.”

Did he just say chili?

Tom Bawcock would turn in his grave. He was the 16th-century fisherman who supposedly began the Stargazy legend by braving the sea alone after stormy weather had kept the fishing fleet in the harbor for many weeks.

His catch was of such biblical proportions that it spared the village from starvation. Mousehole, the story goes, was saved by Bawcock and the resulting pie, filled with seven fish species with heads poking through one huge pastry to prove that they were all there.

It’s one of many heroic tales in the tiny town that poet Dylan Thomas once described as “the loveliest village in Britain.”

Jamie Porter’s father, Simon, has been in these parts all his life, taking his chances in the English Channel and on the Atlantic Ocean. These days he’s skipper of a gillnetter fishing boat called Karen of Ladram.

A fisherman’s courage is indispensable when you’re 200 miles out to sea in all weathers, and always, the best part of the trip is coming home with a haul to Newlyn harbor, just up the coast from Mousehole.

Simon saves the last catch for his son; the fish are so fresh that they’re still flipping in the box as it’s delivered to The Old Coastguard hotel.

There’s another beacon marking Cornish gallantry on a rocky tip roughly midway between Newlyn and Mousehole. It’s a lifeboat memorial that tells of a sea tragedy remembered today as if it was yesterday.

No one knows exactly what happened to the Solomon Browne lifeboat after a mayday call came from a vessel stricken on a maiden voyage between the Netherlands and Ireland on December 19, 1981.

The Mousehole lifeboat crew went out from The Ship Inn that night, into 50-foot waves and hurricane-force winds, intending to save the Union Star as it drifted hopelessly without power in monstrous swell.

Neither the Royal Navy helicopter nor the tug could get close enough to help but the volunteer lifeboat crew made repeated attempts to get alongside.

“We got four men off,” the captain was recorded as saying when he radioed back to Falmouth Coastguard. “Look, er hang on … we got four off at the moment, er … male and female. There’s two left on board …” and then the radio went dead.

Sixteen people lost their lives at sea that night. Eight of them were villagers. Locals still talk about those men. The catastrophe is commemorated every year when the festive lights around Mousehole’s harbor are switched off for an hour.

The past is ever-present in Mousehole. Even back to 1595 when it was on the front line of England’s war against Catholic Spain. A fleet of Spanish galleons landed troops onshore to burn the entire village to the ground. All but one of the residents fled, and the man who remained to defend his home to the last was shot dead.

His manor house is the only building to survive this terrible chapter in Mousehole’s history and, at the time of writing, a sign on the Jacobean granite columned porch announces that it’s for sale (listed at £750,000 – around $914,000). It was expected to sell quickly. Out-of-towners are buying up local real estate – just as they have been all over England – and Mousehole is hot property.

Eyes on the sky

A local bus from Penzance, about three miles away, loops back and forth depositing visitors on the harbor front every half hour or so. Bus is the best means of transport in a town that’s become an advanced driving course for trailers and cars loaded with kayaks, bikes and boards in summer months.

As it arrives on an afternoon in summer, the tide has run out of a mouse-sized hole in the harbor wall. Boats are lying on the sand at odd angles.

Back from the harbor, a tangled network of narrow pathways tumbling with elderflower blossom and dancing butterflies leads to small houses, some of which now serve as tourist accommodation.

Outside one, tourists are swarming, using their phones to snap images of a locket sealed with memories.

They’re sloughing off old lives to try on new, if only for a few weeks, dipping between the boats in the harbor and lying on towels in the sand. They’re staring straight up into the sky as so many pilchards have done before them.