GHALANAI: 35 years old Basharat Khan, who is working as Public Relation Relation officer in Rescue 1122 in District head quarter Ghallani of Mohmand Tribal district said that it was mid of Jun, when a phone call was received that wildfire had been taken place in Salala area near Pak-Afghan border, when the Rescue 1122 team reached the site, it was very much far-away from the main road and the intensity of fire blaze were so hot that no one can go near to the fire site, really this was the most dangerous firefighting operation of my five years career in Rescue 1122, as the firefighting vehicle could not reach the fire site, so we have to connect 3-5 pipes.

Mr. Basharat said that during operation when I sat on a rock for a while, my friend cried that a blaze is coming towards you, so we can hardly escape from that big blaze of fire and the intensity of the fire was so fast that it blew 2 pipe of firefighting vehicle.

He added that this was a beautiful area, filled from the precious trees and forest, but after the wildfire, all the area was looking barren and ugly.

According to an official report submitted to Peshawar High Court, the wildfires affected an area of about 17,095 acres including trees on 488 hectares planted under the billion tree tsunami project in the province including in the Hazara region.

Report states that more than 454 incidents of forest fires were reported in Khyber-Pakhtunkhwa this year. However, the K-P Department of Forests, Environment and Wildlife has officially confirmed only 283 fire incidents.

According to a report compiled by the provincial forestry, environment and wildlife department, of the 210 wildfire incidents between May 23 and June 9, some 55 blazes have been started intentionally by local people and 12 due to dry weather conditions while the cause of another 143 blazes was unknown.

According to sources, about 454 fires were reported in K-P till the end of June and of them, 48 were reported in Abbottabad, 50 in Mansehra, 58 in Haripur, 11 in Shangla, nine in Swabi, six in Battagaram, 40 in Kohistan, two in Chitral Lower and one in Torgarh.

Arsalan Tariq Awan, who is serving as Divisional Forest officer in Mohmand Tribal District said that nine incidents of wildfire have been reported in a single year, He said that the intensity of wildfire has been increased in the recent 2-3 years and one reason is the excessive use of Media (Electronic, Print and social media). In olden days these incidents were not reported due to lack of communication tools, but now if any kind of wildfire occurs, it is reported in minutes and the Forest and other departments responds on time.

Mr. Awan said that when a wildfire occurs in an area, anyone can call to came to Forest department, Rescue 1122 or they even can inform local districtrict administration, after conformation of the news, we inform local administration, rescues 1122 and other line departments like civil defense and PRCS etc. by deploying our teams, we start a proper operation trying to involve district administration, all line departments and the local community by announcement in local mosques. Reaching on the site, our teams first identify the areas of wildfire, then draw a line 2-3 feet to safeguarded the remaining area. At the same time we are trying to establish a good communication with all the departments and stockholders taking part in this operation.” Meanwhile Arsalan expressed his sorrow over the lack of interest by the local community in one of wildfire operation and said that we didn’t get full support from local community, although the Assistant commissioner along with local religious elder informed the local people through proper announcement in nearby mosques, but no one came to help us. They can help us in firefighting operation, because they know the escape routes very well, besides this they can guide us and help us physically. This fire was on the rage soil, which was very much important for the local community, as all the resources were used by them.

Mr. Tariq said that in case of Mohmand Tribal District more than 70% area are range soil, so it is very much difficult to overcome the wildfire in these areas, beside this the high intensity of wind and dry grasses makes the wildfire more aggressive.

About the reasons of wildfire Mr. Arsalan said that there are five basic reasons of wildfire, when shepherds and tourists visits a forest, they do cooking in these areas, after cooking, they keep fire in open air and the wind spreads this open fire into a divesting wildfire. Sometime the visitors throw cigarette in the dry grass which causes wildfire. The third reason is related to the residents of that area, as they deliberately took fire on dry grasses for new and good quality of grass for their goats, sheep, cows and other animals. 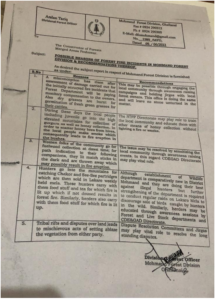 The official documents provided by DFO Mohmand, shows the fourth reason of wildfire is the local people, when they goes for collecting honey and local berry (Called Gurgure in Pashto), so, for honey collection they blow fire on grasses to create smoke in order to run away bees and they can collect honey easily. They collect honey, but leave the fire in open air and through the speedy wind, it covers the whole forest. The fifth and last reason of wildfire have been shown by Forest Department is the dispute amongst pashtun tribes on the boundary of Mohmand and Malakand.

About the misinformation and wrong speculations by some people that wildfire is deliberately blown by its department’s officials he said that all the recorded incidents of wildfire have been occurred in range soil, which has neither any relation with Forest or other Govt. department, nor these trees or area were owned by forest department. He added that there is another conspiracy about wildfire that the govt. want to miss-interpret or hide the number of trees planted in Billion Tree Tsunami project, but this is totally wrong and misleading information, as according to the data of wildfire incidents there is no a single tree planted in those areas, where wildfire incidents occurred in Mohmand Tribal District.

The DFO upper Mohmandappealed the general public that don’t leave fire and cigarette in open air, as a small flam of fire can destroy hundred miles of green and beautiful forest. He also requested the local community and shepherds to not blow their herb and shrubs in summer season, as it can engulf the whole forest and even their village and their homes also. 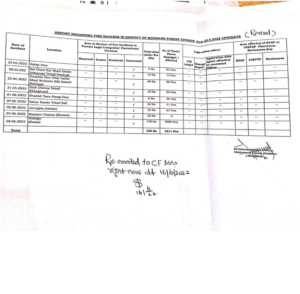 This is the official documents provided by District Forest officeMohmand, which shows that nine incidents of wildfire have been occurred in 2022 wildfire season, which has effected 330 Ha area. So far 4211 trees have been badly effected due to this wildfire.

Under the UN auspices, chaired by China, and hosted by Canada, the 15th Conference of Parties to the UN Convention on Biological Diversity adopted the “Kunming-Montreal Global Biodiversity Framework” (GBF), including four goals and 23 targets for achievement by 2030.

As Biodiversity is related directly on the herbs, shrubs, fruits, crops, forest, trees, insects, genetic species and animals. In short each and every organism in this universe has some special benefit. The environmental scientist believes that all these organisms directly or indirectly depends upon our food, lives and environment, so to minimize climate changes and to live in hormone with nature, it is very much important to safeguard our forests and trees from any kind of wildfire, as when wildfire occurs, it badly damages all the living organism and their habitats which directly depends upon our environment, climate and food. For the security of our food and livelihood, the govt. and all the related departments should take concrete steps to minimize the wildfire incidents and make sure the security of biodiversity.

The Writer is Radio Producer and freelance Environmental Journalist, who tweets on @Muradonline123