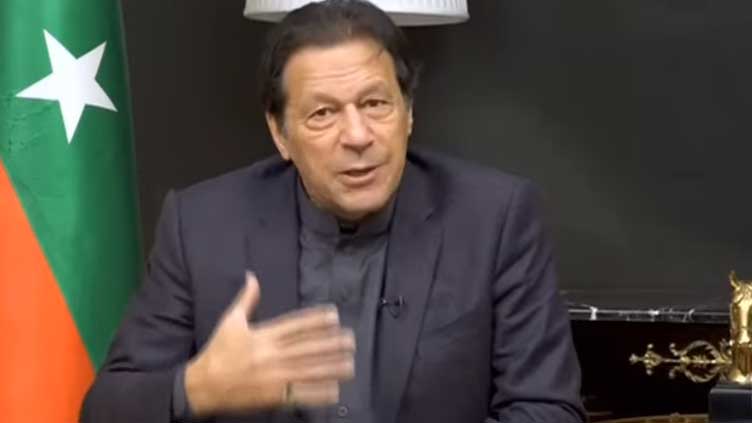 LAHORE (NNI): Pakistan Tehreek-e-Insaf (PTI) Chairman Imran Khan said on Sunday the country will have to approach the International Monetary Fund (IMF) to subside the default risk.
Addressing his workers through a video link, Mr Khan made it clear that the country had no other option, but to approach the International Monetary Fund (IMF), warning the nation to get ready for more inflation in the
coming days.
Mr Khan said that the only solution to all the problems was the unity of the people, urging the nation to struggle for the establishment of system of justice.
Underscoring the PTI’s role in flood relief, the deposed premier said, “When the country was facing the unprecedented floods, we collected money for the relief and rehabilitation of the flood-stricken people.”
Earlier, the PTI chief claimed that the establishment asked three lawmakers from his party to remain neutral in the matter of Punjab Chief Minister Parvez Elahi’s vote of confidence.
Speaking to journalists, Mr Khan claimed that General Bajwa hired Hussain Haqqani in America for lobbying, and that Donald Lu was taught a lesson from Pakistan. He further said that Hussain Haqqani continued to campaign against him and promote General Bajwa.
Mr Khan said that the Trump administration gave him a historic welcome during his visit to the United States as Prime Minister.
Speaking on his last meeting with Qamar Javed Bajwa, Mr. Khan said, “General (Retd) Bajwa called me a playboy, and in reply I said to him that yes, I had been a playboy. Qamar was stabbing us in the back and also showing sympathy.”
Mr Khan claimed the setup of General (Retd) Bajwa was still working in the establishment. He also claimed that the MQM’s various factions were coming together in Karachi, and that the BAP was joining the Pakistan People’s Party (PPP).
Mr Khan slammed Najam Sethi, saying he didn t even know the basics of cricket, and that the PCB s constitution was changed to accommodate Sethi’s appointment.
On the other hand, PTI Chairman and former prime minister Imran Khan has said he is hoped the party will win 2023 elections despite disappointing [political] situation of the country.
“The country reign was handed over to criminals after dethroning the best performing government [of the PTI] through a conspiracy,” he said in a tweet on the eve of the New Year.
“Year 2022: it was the best of times and it was the worst of times. A govt with one of the best econ performances was removed through a conspiracy triggered by supreme self-interest and Pakistan was handed over to a bunch of criminals. They ran economy to the ground and gave themselves NRO-2,” Khan said in the tweet.
The PTI stalwart said a massive public support helped the PTI win 75 per cent of by-elections and that the party established itself as a truly national party.
“Despite the gloom right now, especially of a possible default, I have faith in Almighty Allah and confidence in our people that without any doubt in 2023 through elections the PTI will form strong government and bring about substantive structural reforms to get Pakistan out of the crisis the imported government and its backers have plunged the country into.”