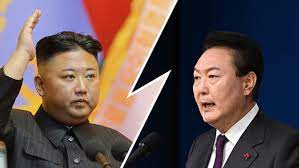 SEOUL (AFP): South Korea called for joint nuclear exercises with the US on Monday, following another round of North Korean ballistic missile tests that capped a record-breaking 2022. Will tensions between the two Koreas escalate to the breaking point in 2023?

After a year marked by repeated North Korean missile tests, the start of 2023 is looking an awful lot like 2022 – with Pyongyang conducting yet another short-range missile test on January 1. This came after North Korea closed the year with three tests on New Year’s Eve.

North Korean leader Kim Jong-un called on Sunday for an “exponential” increase in the country’s nuclear arsenal this year, including by mass producing nuclear-tipped missiles. In his speech, the North Korean dictator also explicitly described South Korea as a “target”.

This is very telling, said Christoph Bluth, an expert on the two Koreas at the University of Bradford, because Pyongyang historically avoided the term because it needed to maintain the idea of the “reunification of two brotherly peoples”.

Several events from the past few days show that “we are in avery worrying situation” when it comes to North Korea, said Danilo delle Fave, an associate researcher at the International Team for the Study of Security in Verona.

The first such event was North Korea sending five drones into South Korean airspace on December 27, defying Seoul’s air defence system. “North Korea wanted to prove that it could demonstrate success in this field – which its southern neighbour hasn’t yet done, even though South Korea has a technological advantage,” Bluth said.

Then South Korean President Yoon Seok-yeol gave an interview with newspaper Chosun Ilbo published on Monday, in which he said that the US’s “nuclear umbrella” and “extended deterrence” no longer suffice to reassure South Koreans. Yoon startled many observers by calling for joint nuclear exercises with the US.

“This doesn’t mean that Seoul is planning to acquire nuclear weapons in the near future,” Bluth said.

But, in any case, joint nuclear exercises with the US would be an “unprecedented step” for Seoul as well as for Washington, delle Fave pointed out.

Such exercises would consist of simulating a North Korean nuclear attack and preparing for a response, “both conventional and nuclear”, delle Fave said. The US would teach its ally how to support it in conducting a nuclear counter-attack on North Korea with US weapons from South Korean soil.

“It would be the first time that a non-NATO country [Washington classifies South Korea as a major non-NATO ally] has been trained to handle nuclear weapons,” delle Fave added.

According to Chosun Ilbo, Washington is open to the prospect – although the Biden administration has refused to confirm this officially, Reuters reported. When reporters at the White House asked US President Joe Biden if there were any ongoing discussions between the US and South Korea on joint nuclear exercises, Biden said no.

However, the mere prospect of such exercises sends a signal to Pyongyang. Raising the prospect is a way of “making North Korea understand that in the event of a bombing on their part, there could very well be a nuclear retaliation, even if South Korea itself does not have any nuclear weapons”, Bluth put it.

It is also a way of applying pressure on Kim’s weak spot. “One of the North Korean regime’s greatest fears is that its southern neighbour will acquire nuclear capabilities,” delle Fave said. In this case, joint exercises with the US would allow Seoul to pull off something paradoxical – flexing its nuclear muscles while remaining officially committed to nuclear non-proliferation.

The announcement is part of a broader change of tack enacted by Yoon Seok-yeol’s conservative government, which took power in May 2022. “Yoon’s government has made a complete break with his liberal predecessor’s diplomatic openness towards the North; and the current escalation of tensions is in part the result of this much more hawkish stance towards Pyongyang,” delle Fave said.

Yoon has even indicated that he intends to designate North Korea as an “enemy” country in a white paper on national security, after that official label was ditched in 2018.

Pyongyang, meanwhile, has been stuck since the 2018 summit with then US president Donald Trump, Bluth said. “[Trump’s then national security advisor] John Bolton laid down the principle that North Korea had to completely get rid of its nuclear programme before any easing of sanctions – and Pyongyang absolutely could not accept that.”

Faced with the Trump administration’s hawkish approach to North Korea, followed by the Biden administration’s focus on Russia and China instead, Pyongyang chose to “increase the pressure on South Korea, in the hope that Seoul would push its American ally to soften its position towards Pyongyang”, Bluth said.

But this was a miscalculation on Kim’s part, Bluth continued. “Yoon is not reacting at all as Kim expected – instead, he’s pushing Washington to become more military involved in the region,” he put it.

Indeed, Yoon is responding to the North Korean threat by urging the US to provide Seoul with more weapons. “We’re currently seeing the militarisation of South Korea,” Bluth observed.

All that said, one should not be too pessimistic: both analysts were very clear that the current escalation of tensions is unlikely to erupt into open conflict. “North Korea knows there are distinct limits to how far it can go, because it is economically dependent on China, which does not want the Korean peninsula to be engulfed in conflict,” delle Fave said. In any case, he went on, Pyangyang knows “the US can defeat it militarily”.

Nevertheless, the two countries are playing a dangerous game, delle Fave underlined. “There’s always the risk that an unfortunate accident will cause the situation to get out of hand,” he said. In this respect, North Korea’s deployment of drones amid simmering tensions creates the possibility of an unintentional incident with severe consequences.

And even if no such accidents occur, Bluth said, the fact remains that North Korea is conducting a lot of ballistic missile tests while South Korea is increasingly hawkish. That could now become the “new normal”, he concluded.