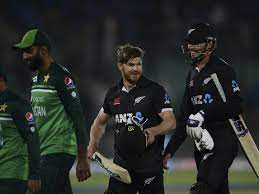 KARACHI (AP): Glenn Phillips smoked an unbeaten 63 runs from 42 balls to seize for New Zealand a thrilling two-wicket win over Pakistan in the series-deciding one-day international on Friday.

Phillips counterattacked after a collapse and carried New Zealand over the line with 11 balls to spare. They rounded off their tour with a 2-1 victory, their first ODI series win on the subcontinent in 15 years.

“We were in the game at the halfway stage but made a few errors,” New Zealand captain Kane Williamson said. “Glenn was just playing how he plays. I don’t think he wanted to run too much; he was a bit under the weather. He just grabbed it (the game).”

Fakhar and Rizwan combined in a 154-run third-wicket stand after vice-captain Shan Masood, playing his first game of the series, was out for zero and captain Babar Azam was stumped for the third time in the series on 4.

Fakhar adjusted well on the slow pitch and raised his 100 off 120 balls with 10 fours and a six. New Zealand clawed its way back into the game by claiming seven wickets for 105 runs.

Ish Sodhi broke the threatening stand by having Rizwan clean bowled off a sharp googly, while substitute fielder Henry Nicholls brilliantly ran out Fakhar and Haris Sohail off direct throws.

Agha Salman made 45 off 43 balls, but New Zealand kept striking at regular intervals. Tim Southee claimed 3-56 and Lockie Ferguson chipped in with 2-63 in his 50th ODI.

Williamson (53), Devon Conway (52) and Daryl Mitchell (31) all made good starts before Pakistan squeezed the Black Caps in the middle overs.

Conway sliced a catch to point off Salman and Mitchell reverse swept the offspinner to short third man. Williamson was run out comfortably while going for a quick single in the 34th over.

Tom Latham dragged Mohammad Wasim back onto his stumps while attempting a pull shot against the fast bowler and New Zealand slipped to 205-6 in the 39th over.

But Phillips took the game away from Pakistan. He hit four massive sixes and four boundaries in a blistering 64-run stand with Mitchell Santner (15) off just 44 balls.

“When Rizwan and Fakhar played, it looked like we’d touch 300,” Babar said. “There were lots of soft dismissals and we were 20-30 runs short. There wasn’t much turn for our spinners and we couldn’t quite execute in the last 10 overs with the ball.”

New Zealand drew the two-test series 0-0 on its first test tour to Pakistan in 20 years. New Zealand dominated in both tests before Pakistan escaped with draws.

New Zealand moves on to India to play three ODIs and three Twenty20s from next week.