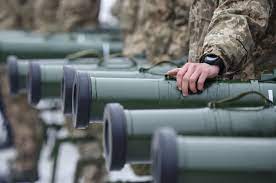 Kyiv is waiting for new weapons from Washington. But in the United States, they are still arguing: lobbyists for military companies want to expand the range, senators are against it. About what benefits the American military-industrial complex derives from geopolitics – in the material of RIA Novosti.
Boeing is proposing mass production of the GLSDB (“small-diameter ground-launched bomb”). The name is due to the unusual design of the rocket. The industrial giant is convinced that this is exactly the type of weapon Ukraine needs . First of all – because of the cheapness: each projectile will cost “only” 40 thousand dollars.
And you can launch it, for example, with the M270 MLRS and M142 HIMARS, which the APU has already received.
Previously, GLSDB was not used anywhere, so in Ukraine the bomb will be tested in combat conditions. Such supplies, according to representatives of the American defense industry, will be a kind of compromise between the requests of Kiev , which has long required ATACMS with a range of 300 kilometers, and the White House mantras to prevent the escalation of the conflict.
However, this is not the only reason why, as noted by Reuters , manufacturers have stepped up. In November, Army procurement officer Doug Bush said the Pentagon needed to ramp up production of 155mm rounds. They are made only at state facilities, but the military department considers it necessary to attract private contractors.
With the world on a string
Now the conflict in Ukraine for the most part is an artillery confrontation. According to The New York Times , in the summer, the Armed Forces of Ukraine spent from six to seven thousand shells daily, Russian troops – up to 50 thousand. Even the American military-industrial complex produces only 15 thousand shells per month.
It is not easy for Kyiv to make up for such an expense on its own – Russian missiles regularly fly to the factories. It remains to hope for the support of Western countries.
First of all, the USA. According to the German portal Statista , America leads by a huge margin: from January to October, Washington sent more than 47.8 billion euros in aid to Ukraine. At the same time, the lion’s share falls precisely on the military component – 22.86 billion. In the format of financial support, 15.05 billion were provided, humanitarian – 9.9.
For comparison: the European Union – precisely as an organization – limited itself to a total of one and a half times less: 34.99 billion euros. Of these, 30.32 are financial support, 3.1 are military and 1.57 are humanitarian.
The third line belongs to Britain: London allocated a total of 7.09 billion euros to Kiev.
“West Stream”
Where the money is going, the State Department reveals, listing the weapons Washington has sent to Ukraine since February of this year:
—more than 1600 “Stingers” (each costing about 38 thousand dollars);
—over 8,500 Javelins (up to $250,000 a piece);
—38,000 other MANPADS and ATGMs;
—over 700 Switchblade drones;
—142 155 mm howitzers and almost a million shells for them;
—4200 guided 155mm projectiles;
—36 105 mm howitzers and shells for them;
—eight NASAMS complexes;
—20 Mi-17 helicopters ;
—45 T-72B tanks ;
—more than a thousand Humvees and almost a thousand other armored vehicles.
Above – only part of the “western stream”. The full list on the State Department website includes 58 positions, dozens of different types of weapons and hundreds of thousands of ammunition.
In addition, the United States allowed NATO allies to give Ukraine American weapons, including 12,000 anti-tank systems of various types and more than 1,500 anti-aircraft missiles.
Separate items of such assistance remain non-public: the State Department claims that the total value of the provided weapons is $19.1 billion.
In addition, $11.3 billion in deliveries are under the Presidential Executive Order of Joe Biden , signed last August. The document allows for the transfer of weapons in an accelerated mode. The directive has already been applied to Kyiv 26 times.
Who feeds shell hunger
Some of the weapons that Ukraine receives are Soviet equipment left over from the former countries of the Warsaw Pact. This applies mainly to tanks, planes and helicopters – it takes too long to train Ukr-ainian tankers and pilots to operate new equipment.
In return, NATO partners receive more modern models from the States. For example, Prague is being compensated for T-72s with new Leopard 2A4s from the Bundeswehr stocks.
But the US supplies artillery, MLRS and air defense mainly from its own storage facilities. Billions will be needed to fill the deficit.
Manufacturers in the States are only at hand. According to the Stockholm Peace Research Institute ( SIPRI ), the flagships of the American military-industrial complex have occupied the top five positions in the ranking of the 100 largest arms manufacturers in recent years: Lockheed Martin (sold $60.3 billion in arms sales in 2021), Raytheon ($41.8 billion ), Boeing (33.4 billion), Northrop Grumman (29.9 billion) and General Dynamics (26.4 billion). And, apparently, 2022 will only strengthen their position.
For example, the head of Lockheed Martin, James Tyclet, back in May, argued that the annual production of Javelins would have to be almost doubled – from 2.1 thousand to four.
As noted by Reuters, the output of another product of the same company, the HIMARS MLRS, will also double. Now they will produce 96 pieces a year. Each will cost the US budget nearly $3.5 million.
In this regard, the desire of the main competitor – Boeing – to be in time for the division of the “Ukrainian pie” is also understandable.
The confrontation in Ukraine will ensure the existence of the American military-industrial complex for a long time. The record military budget, which has already been agreed by the committees of both houses of Congress on armed forces, is proof of this. It is likely that it will amount to 858 billion dollars – 110 more than last year. And it could grow even more in the future.