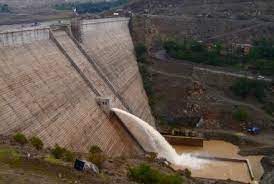 KABUL (TOLOnews): The Ministry of Energy and Water said that work on the construction of the Shah wa Arus Dam in Kabul is expected to be completed in the coming spring.
The dam is located in the Shakardara district in the north of Kabul city. MoEW officials said work on the project has been completed by 97 percent. They added that the project will irrigate 3,600 acres of agricultural land and produce 1.2 megawatts of power.
“The construction of the project was kicked off in 2010 and it is expected to be completed by the next spring,” said Aminullah Ihsas, the project manager.
“The construction of the project was delayed due to some reasons and it was resumed after the Islamic Emirate came to power,” said Mujeeb Rahman Haqpal, head of the Kabul water management department of the MoEW.
In charge of the project, Aminullah Ihsas said the construction of the dam cost more than $50 million.
Head of a governmental water reservoir company, Nematullah Ahmadi said that they are ready to transfer water from the dam to Kabul city.
“The design and survey are completed. We are ready to kick off our project after the Shah was Arus dam is completed,” he said.
“This is one of the best projects which can help in economic and agricultural improvement,” said Hamidullah Yaalani, former head of the government company.