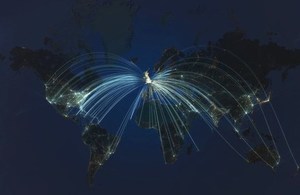 LONDON” Cricket bat and pad exports from the UK to India could be in line for a big boost next season thanks to the Free Trade Agreement (FTA) between the two countries.

The latest round of negotiations on the deal, kicked off by the Trade Secretary in person, wrapped up in New Delhi last week.

The agreement seeks to cut red tape and tariffs for businesses, which could include reducing the current 20% tariff on cricket bats and pads made in the UK.

Any reduction could benefit iconic British brands like Gunn & Moore, whose bats are used by England captain Ben Stokes and have been trading with India for more than a century.

The Nottingham-based firm, which uses English willow in its bats and exports both wooden bat ‘clefts’ and fully made bats to India, welcomed the negotiations, saying cuts to tariffs would help its business.

UK exports to India of English willow, which is bought by Indian companies to make bats used by players at all levels of the game, were worth over £6 million annually between 2018 and 2020, and are currently subject to a tariff of 10%.

An FTA could see these taxes cut or even removed entirely, along with a range of duties on other exports that would help UK firms expand into an economy due to become the world’s third largest by 2050.

The latest round of negotiations completed a week ahead of yesterday’s (Friday, December 23) Indian Premier League (IPL) auction, which saw its teams bid for players like Stokes and some of his England ICC T20 Men’s World Cup-winning team-mates to represent them in the season ahead.

English cricket is rightly proud of its world champion players – but also of our brilliant exports like the willow that goes to make the bats hitting boundaries across the world.

We look forward to concluding a modern ambitious trade deal with India that helps UK exporters of all types hit their sales targets and builds on the increasing amount of British goods and services sold to India, worth £12 billion in the 12 months to the end of June.

Gunn & Moore Cricket are fully supportive of a UK-India trade deal and look forward to that having a very positive outcome for both countries.

England and India have long shared a passion for cricket that extends beyond the boundaries of play. We are fortunate to have a game that can not only inspire millions of people across both countries but which creates opportunities to compete and learn from one another in major tournaments such as the IPL and bring us all closer together.

Board of Control for Cricket in India Honorary Secretary Mr Jay Shah said:

Since 1932, when India played its first-ever Test against England at Lord’s, India-UK cricketing bonds have only grown stronger with each passing year.

While India enjoys tremendous support in England, the English players have been the crowd favourites in India and are certainly on the must-buy lists of IPL franchises.

The current UK – India trading relationship is already worth more than £29 billion and UK-Indian investments support nearly half a million jobs across both countries.