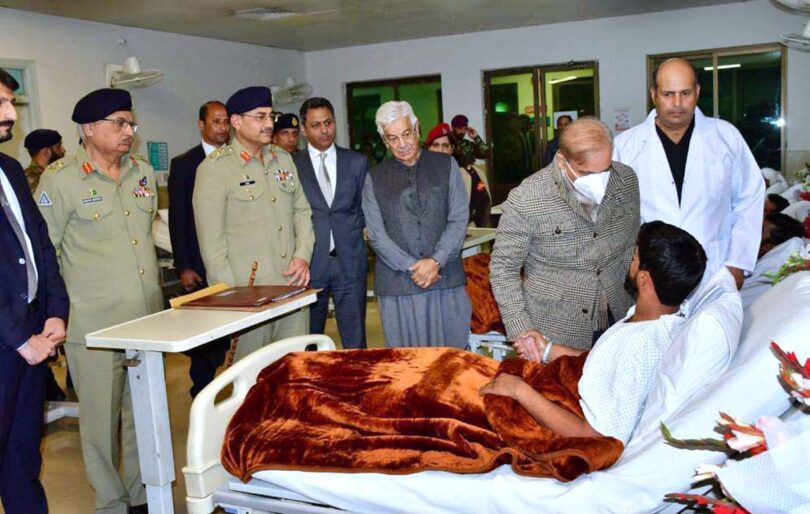 RAWALPINDI (APP): Prime Minister Shehbaz Sharif on Thursday said the government would establish writ of the state at any cost and no one would be allowed to derail the hard-earned gains of war on terrorism.
“Writ of the state will be established at all costs and no one will be allowed to derail the hard-earned gains of war on terror achieved through unparalleled sacrifices of the nation and valiant armed forces,” the prime minister said talking to the officers and soldiers at CMH Rawalpindi who got injured during the CTD complex Bannu operation.
The prime minister met the injured officer and soldiers and paid tribute to the courage and valour of the troops who cleared the Counter Terrorism Department (CTD) complex in Bannu. He said the martyrs and their families had rendered supreme sacrifices for ensuring the safety and security of the people of Pakistan.
Prime Minister Shehbaz said, “We are determined to fight out terrorism in its all forms and manifestations, and break the nexus between terrorists and their supporters and sympathisers till achieving a peaceful and stable environment.”
Rights of religious minorities to be protected: PM: Prime Minister Shehbaz Sharif Thursday assured that the government would protect the rights of people from all religious minorities, including Christians, Sikhs, Hindus and Parsis, and ensure a secure environment for them.
Speaking at a ceremony organized here to celebrate Christmas, he said, “We want that Pakistan should move forward according to the thinking and teachings of the Quaid-e-Azam and Allama Muhammad Iqbal, who called for peace and brotherhood among all religions.” He reminded that Quaid-e-Azam Muhammad Ali Jinnah, in his speech on August 11, 1947, gave a clear message about the equality of rights of minorities. Under the Constitution of Pakistan, people of all religions in the country had equal constitutional and political rights, and they were allowed to take part in all fields of life, he added.
Unfortunately, PM Shehbaz said, due to extremism and terrorism in the last decades, a number of incidents happened which was unfortunate and weakened the protections given to the minorities who felt threatened and vulnerable.
However, the Pakistani state succeeded in eradicating terrorism and extremism, he said while referring to the latest incident in Bannu where terrorists made people hostage but later they were killed by armed forces. The personnel of armed forces embraced martyrdom during the incident, he noted.
While felicitating the Christian community on Christmas, he said, “We all share the happiness of the Christian community on this auspicious occasion.”
He lauded the Christian community for its sacrifices and services for the nation right from the start of the movement for the independence of Pakistan. People from all walks of life including teachers, students, religious scholars, doctors, engineers and labour contributed to the country’s freedom, he observed.
“We value from the core of our heart your services for Pakistan. Your services for the progress and development of Pakistan will be remembered in golden words. Justice Cornelius, Group Captain Cecil Chaudhry, and Sister Ruth Pfau who was German and served the Pakistani nation for 55 years, were examples of service to Pakistan.” He said the Christian community contributed immensely in the fields of education and defence. “I myself got education in a missionary school Sacred Heart”.
He said Hazrat Isa gave a message of peace, brotherhood and love to the humanity. The Holy Quran mentioned Hazrat Isa and Hazrat Maryam on numerous occasions, he said, adding all religions promoted peace and brotherhood in the world.
“People from all religions across the world whether Christians, Hindus, Sikhs, Parsis or Muslims wanted to live in peace and harmony. Nobody should oppress and do injustice to others or violate rights of others and change religion of each other by force. Islam nor any other religion allow this.”
Islam ordered that rights of people of all religions should be protected, he stressed.
He assured that as per demand of the religious minorities a national minority commission would be formed after legislation in the Parliament. Minister for Religious Affairs Mufti Abdul Shakoor, while speaking on the occasion, said Islam taught that followers of all religions should be treated equally. He felicitated the Christian community on the occasion of Christmas.
The prime minister along with bishops and leaders of the Christian community and other minorities also cut a Christmas cake at the event.