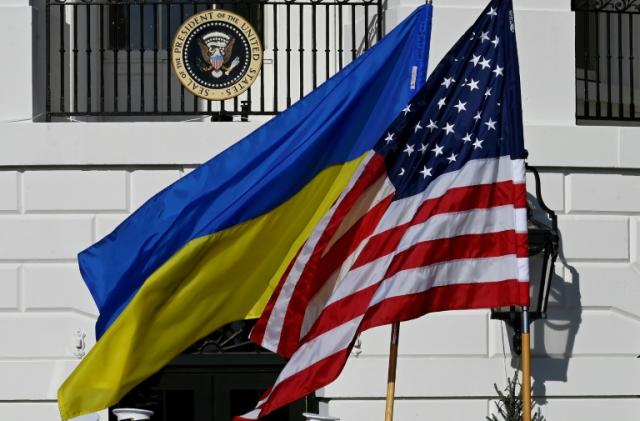 WASHINGTON (AFP/APP): Days before the year-end holiday, downtown Washington’s streets were dominated on Wednesday not just by Christmas decor but by the flag of Ukraine, marking the surprise visit to the US capital by Volodymyr Zelensky.
Pennsylvania Avenue, the grand boulevard which links the White House and Congress, was blocked off for the one-day visit of Ukraine’s president, while banners of Ukrainian yellow and blue were paired with the US flag’s red, white and blue.
Outside of the White House, Zelensky’s first stop of the day, television cameras from around the world were there to record the visit of the wartime leader, his only known trip outside his country since the conflict with Russia started exactly 300 days ago.
Americans called him heroic and compared the visit to that of Britain’s premier Winston Churchill, who came to Washington in 1941 and addressed the Congress on wartime cooperation between the two allies — as Zelensky did later Wednesday evening.
Before he addressed the special joint session of Congress, Zelensky was greeted by President Joe Biden in the White House Oval Office, where they sat next to a crackling fireplace. In the freezing weather outside, Ukraine supporters lined security barriers to show their support.
Yarema, a 17-year-old Ukrainian student in the United States, was wrapped in the Ukrainian flag, hoping to see Zelensky as well as visit the city. “I wanted to show my support to our president and my support to Ukraine,” he said. Asked what Zelensky should be requesting from Biden, Yarema replied: “Arms, arms and even more arms.”
Bakhtiar Mendybay, 35, who traveled nearly an hour with his children from his home in Virginia to the White House, said he could not miss the event.
He had one hand on a stroller and the other wielding a sign which showed Zelensky calling for more weapons. “I’m here today to greet the greatest man alive,” said the native of Kazakhstan, which like Ukraine is a former part of the Soviet Union and still under significant Russian influence.
“Ukrainians, they’re fighting for everyone, including my country, my people. I mean, they stand up against Russian imperialism,” said Mendybay, who has lived in the United States for 10 years.
Security was tight, with hundreds of police and Secret Service officers out in force for Zelensky’s visit.
“We are very cognizant that Russia has assets in this country and might try to do something,” a senior official of the US Capitol Police told ABC television.
“We know what is at stake,” the official said.