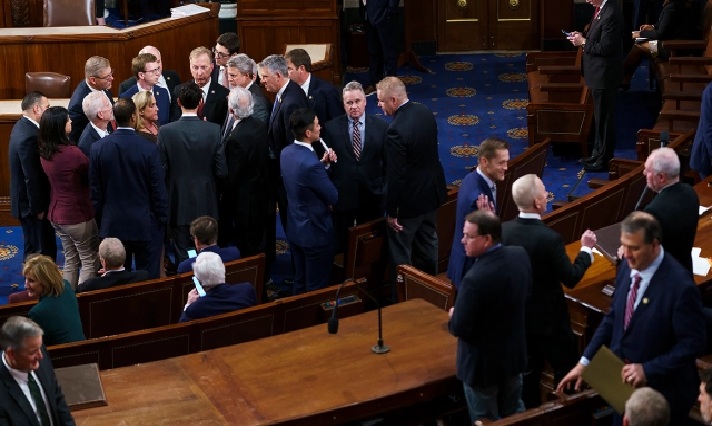 The GOP has stumbled at the starting line of the new Con-gress, squandering a mo-ment of rare opportunity.
Having won a House majority, albeit a slim one, most Republican members were eager to turn up the heat on President Biden and advance the agenda on which voters elected them.
Instead, they have spent almost a week embroiled in a debacle, only finally electing Rep. Kevin McCarthy (R-Calif.) as Speaker in the 15th round of voting soon after midnight Saturday.
Even then, the core problem of disunity between McCarthy’s supporters and opponents was on vivid display, with pro-McCarthy Rep. Mike Rogers (R-Ala.) having to be restrained from a physical confrontation with one of the most fervent hold-outs, Rep. Matt Gaetz (R-Fla.).
Enmity had bubbled all week between the two camps, with McCarthy supporters like Rep. Dan Crenshaw (R-Texas) branding the dissenters “clowns.”
One major strand of the frustration was a stark fact: the internecine squabble was preventing anything else from getting done.
Rep. Don Bacon (R-Neb.) told the Omaha World-Herald that the anti-McCarthy members were “making demands and acting like they are more righteous and pure than anyone else…We’re tired of it.”
Bacon added, “At some point, if they refuse to play at all, we have to find another way to govern.”
One group of center-right members, the Republican Main Street Partnership, even launched a digital ad campaign with the goal of “reminding Americans across the country that the majority of the House Republican Majority is ready to get to work for the American people.”
The problem is, the reminder was needed in the first place.
The chaos in which the GOP has become enmeshed is especially galling for many Republicans because their opponents are in a vulnerable position.
Though Democrats did better than expected in November’s midterm elections, they are hardly riding high.
Biden’s approval ratings remain stubbornly underwater.
The weighted average maintained by polling and data site FiveThirtyEight had Biden winning the approval of roughly 44 percent of Americans as of Saturday evening. Fifty-one percent disapproved of the president’s performance.
There are several specific issues that are sore spots for the administration, particularly inflation and immigration.
Biden is expected to make his first visit as president to the southwestern border on Sunday, when he will go to El Paso.
The visit — together with a plan released Thursday aimed at curbing the rush of migrants from Cuba, Haiti and Nicaragua — reflects an awareness within the White House that the administration needs to do more to get on top of the issue.
Border Patrol agents had almost 2.4 million encounters with unauthorized migrants at the southwestern border during the 2022 fiscal year — an all-time high.
The numbers have overwhelmed shelters and other facilities in the region, and have caused stress farther afield.
New York City is currently accommodating more than 20,000 migrants in its shelter system.
A recent poll from The Economist/YouGov indicated that just 31 percent of Americans — and a mere 18 percent of those who identify as independent — approve of Biden’s handling of the immigration issue.
But instead of pressing the case against Biden this weekend, Republicans will, at best, be having to explain why the process of electing a Speaker took more rounds of voting than it has done at any point since the Civil War.
“It’s not a great look, it doesn’t set a great tone,” GOP strategist Dan Judy told this column shortly before McCarthy was elected.
Judy emphasized that memories of this week’s mayhem could fade if the House Republicans get down to more “substantive” business soon.
But he also acknowledged a more pessimistic scenario in which “this could certainly set the tone for a conference that is dysfunctional and divided.”
Some moderates fear exactly that outcome, in part because of the compromises McCarthy has made to get himself over the finish line.
McCarthy won the gavel at the price of a number of concessions, including making it much easier for members of try to topple a sitting Speaker.
Democrats, meanwhile, can hardly believe their luck.
Several, including Reps. Ted Lieu (D-Calif.) and Bill Pascrell (D-N.J), had made gleeful references to eating popcorn while watching Republicans vainly try to unite earlier in the week.
After Rep. Kat Cammack (R-Fla.) alleged Democrats had been drinking amid the proceedings, Rep. Alexandria Ocasio-Cortez (D-N.Y.) tweeted back, “If only! If Dems took a shot every time McCarthy lost a Republican, we’d all be unconscious by now.”
Even Biden and Vice President Harris seem bemused by events at the other end of Pennsylvania Avenue, agreeing amid smiles at a Thursday news conference that they were paying close “attention” to the goings-on.
Democratic strategist Basil Smikle told this column, “The juxtaposition between the disarray on the right and the consensus on the left is glaring for the voter. Voters don’t mind divided government but what they care about is a functioning government.”
The picture could yet change. Now Republicans have finally elected a Speaker, the political focus will shift.
But if the old saying that you don’t get a second chance to make a first impression holds true, the GOP will have plenty of cause to rue the events of this week.