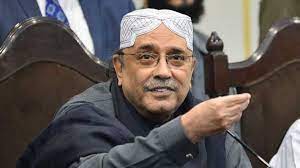 ISLAMABAD: Pakistan People’s Party (PPP) Co-Chairman and former President Asif Ali Zardari has said that with God’s will, the assemblies will complete the parliamentary term of five years and the country will be on the path of a strong democracy.

Former President Asif Ali Zardari in his message on Shaheed Mohtarma Benazir Bhutto’s Martyrdom Day said that she had guided him in politics, and now the philosophy of Shaheed Bibi is guiding him.

Showing his determination with the ideology of his assassinated wife, Asif Zardari said he cannot ignore the mission of Shaheed Benazir Bhutto even in his dream.

He said no one faced difficulties like Bibi for the sake of the restoration of the constitution and democracy. She dispelled the fear of dictators with extreme bravery, patience, and endurance, he added.

Former President Asif Ali ZARDARI further said that after going through oppressive conditions, they (PPP leadership) have become stronger as this is what Bibi Shaheed has taught to them. He also said a continuation of democracy was the beautiful dream of Shaheed Bibi Benazir Bhutto, and Alhamdulillah he has fulfilled her dream.

Zardari said the declaration of the institutions to be detached from politics and follow the constitution is the realization of Bibi Shaheed’s dream.

He said they will continue the mission of serving the people. (NNI)