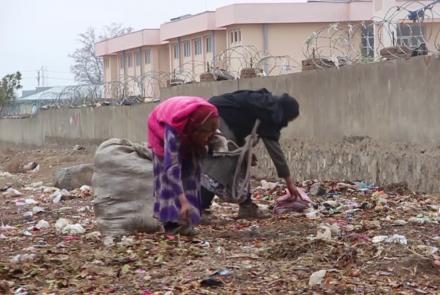 KABUL (ToloNews): Save the Children in a report on Thursday said that more than 6.6 million people are facing hunger in Afghanistan which is on top of the countries facing severe hunger.

“The country with the highest number of people facing severe levels of hunger was Afghanistan where this number increased to 6.6 million in 2022 from 2.5 million in 2019,” Save the Children said.

The organization said that the number of people facing severe hunger has surged in eight countries in the world by 57 percent between 2019 to 2022.

“The analysis, based on Integrated Food Security Phase Classification (IPC) data, found that Afghanistan, Central African Republic, DRC, Haiti, Somalia, South Sudan, Sudan, and Yemen had the highest numbers of people facing emergency and catastrophic levels of hunger and malnutrition, between 2019 and 2022,” the report said.

A number of Kabul residents said that an increase in unemployment is one of the main reasons behind the deteriorated economic situation among people.

“It has been one year that people cannot find jobs. We are here in Haji Yaqoub Square since morning and I even didn’t have lunch yet,” said Mohammad Zarif, a daily wager in Kabul.

“We are 12 people at home. I am the only breadwinner for the family,” said Mohammad Sadiq, a resident of Kabul.

Analysts said that there is a need for investment in infrastructural projects to alleviate poverty in the country.

“To reduce poverty in Afghanistan, there should be a focus on agriculture, investment, and management of issues that affect the poor people,” said Mir Shakib Mir, an analyst in economic affairs.

“In short terms, to reduce poverty in Afghanistan, there is a need for Humanitarian assistance by the UN and other organizations as well as the ruling regime,” said Siyar Quraishi, an economic affairs analyst.

Earlier, the United Nations Office for the Coordination of Humanitarian Affairs said that the deteriorating economy has caused sharp declines in income, rising debt, and high unemployment and that due to a severe increase in commodity prices, people now spend 71 percent of their income on food.