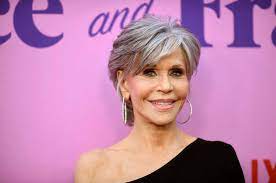 LOS ANGELES (AFP): US actress and activist Jane Fonda says her cancer is in remission, just three months after revealing her diagnosis.

The Oscar winner, a prominent supporter of the Democratic Party, wrote on her blog on Thursday that she is no longer in treatment for non-Hodgkin’s Lymphoma.

“Last week I was told by my oncologist that my cancer is in remission and I can discontinue chemo,” the environmentalist, who turns 85 next week, wrote in a post entitled “Best birthday present ever”

“I am feeling so blessed, so fortunate. I thank all of you who prayed and sent good thoughts my way. I am confident that it played a role in the good news.”

Fonda, who shot to fame in the 1960s, revealed in September that she had been diagnosed with non-Hodgkin’s lymphoma, a cancer that starts in the lymphatic system, a part of the body’s immune defenses, and can develop into widespread tumors.

Fonda said treatment had started out easily enough, but had got harder.

“I’m especially happy because while my first 4 chemo treatments were rather easy for me, only a few days of being tired, the last chemo session was rough and lasted 2 weeks making it hard to accomplish much of anything.”

She has five other Oscar nominations in her career, four of them for best lead actress.

As well as anti-war activism during the US-Vietnam war that saw her dubbed “Hanoi Jane” and blacklisted in Hollywood, she was also a major figure in the home fitness video craze of the 1980s.

Fonda continues to work, and appears as the voice of an elegant dragon who is the CEO of a luck-making operation in the Apple TV+ animated movie “Luck.”

She also stars in the popular, long-running Netflix hit “Grace and Frankie.”

Fonda comes from a family of famous stars; her father Henry was a legend of the big screen appearing as the hold-out juror in “12 Angry Men,” and winning best actor for “On Golden Pond” (1981).

Her brother Peter was a seminal figure in 1960s counterculture, whose turn in “Easy Rider” is a touchstone of Hollywood history.