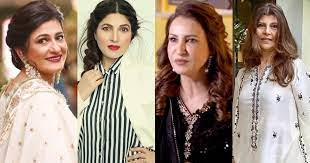 LAHORE: Veteran actress Saba Faisal started her career as a programme announcer on PTV in the 80s. Since then, she has reinvented herself several times during her career and always came out as the best version of herself.

In a recent interview with YouTube celebrity host Nadir Ali, upon being asked about the professional jealousies, Saba said that she does not feel jealousy towards anyone or from anyone as many veteran artists ask her about maintaining themselves just like she did.

She stated that she has even shared her weight loss tricks with them as well and they have gotten results by copying her tricks. She also shared that she was the first one to wear an ‘Allah’ locket which became a trend and everyone was copying her style.

When the Habbs actress Faisal came into acting, she saw the Queens of the industry Saba Hameed, Rubina Ashraf and Shagufta Ijaz already ruling all the dramas since the golden times of PTV. Saba Faisal started her acting career afterwards but today she is seen in every other hit Drama project.

She said that many people were stars when she came into acting and she started working on herself, her skills and her craft. At first she was not acknowledged justly but today she is the first artist to get recognition when credits roll.