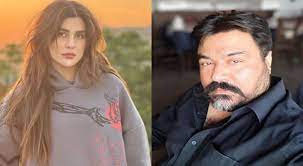 In a statement, she said she would take legal action against him if he fails to retract his allegations and does not apologize to her within three days.

Kubra Khan asked Adil Raja to come up with proof to corroborate his claims or be prepared to face legal action.

She said she is also from the UK and would chase him there as well.

Adil Raja claimed that some Pakistani actresses and models were working in cahoots with General (retd) Bajwa and former ISI honcho Faiz Hameed to trap politicians.

Although he shared the initials of the actresses instead of full names, it became obvious to netizens who he was referring to.

Amidst the ongoing controversy, Sajal Aly tweeted, “It is very sad that our country is becoming morally debased and ugly; character assassination is the worst form of humanity and sin.”