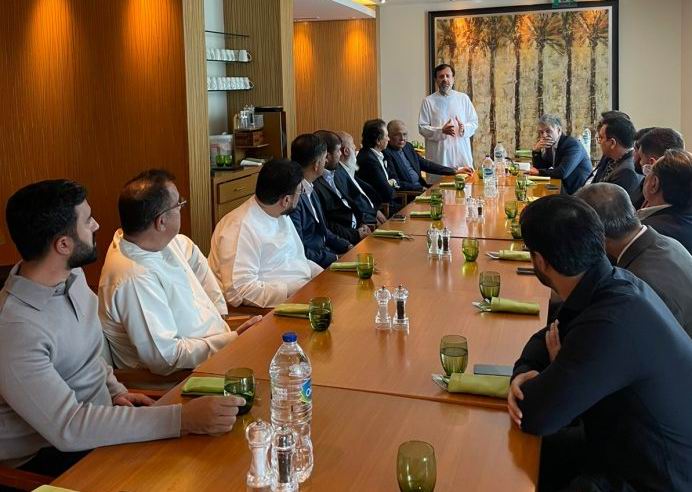 DUBAI (Khaama Press): Afghan Business Council members held a meeting at JW Marriott hotel in Dubai, United Arab Emirates aimed at addressing the challenges of the private business sector in Afghanistan and beyond.
Haji Obaidullah Sader Khail, Head of Afghanistan Business Council (ABC) said on Twitter that the second meeting of the council was held at JW Marriott hotel in Dubai on January 18, aimed at finding a comprehensive solution to the challenges Afghan businessmen are currently faced with in Afghanistan and overseas.
“A delegation of Afghan businessmen should travel to Kabul and Kandahar, meet with the Islamic Emirate officials, and address the many issues private businesses are faced with. As of now, some 300,000 Afghan nationals reside in the UAE, 80 percent of whom are entrepreneurs and business people,” Sader Khail said.
Sader Khail further added that the owner of renowned private companies and banks in Afghanistan including Azizi Bank, Afghanistan International Bank, Afghan United Bank, Ghazanfar Bank, KamAir, Coca-Cola, and Pepsis reside in the UEA.
The first meeting of ABC was held on January 3, and soon, a third gathering will be held intended to invite those members who have not been part of the past two meetings.
Previously, Afghan Business Council in the United Arab Emirates in a statement had called on de facto authorities of Afghanistan and the United States to fully implement Doha Peace Agreement.
Afghan Business Council in the UAE stated in its newsletter that since the Taliban’s return to power in August 2021, Afghanistan’s economy has faced a 30% recession and the country’s gross domestic product has decreased by 35%.
Meanwhile, the country’s Chamber of Commerce and Investment says that the due to the imposed sanctions, foreign investment and trade relations have been substantially reduced in Afghanistan.