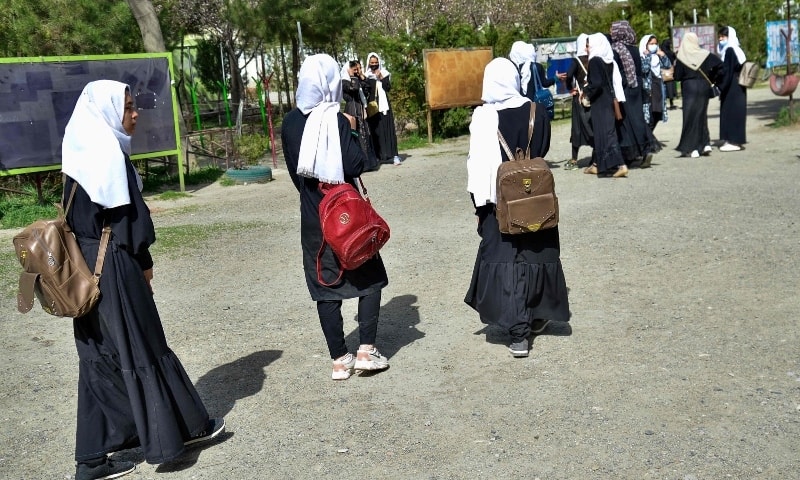 KABUL (AFP/APP): Hundreds of young women were stopped by armed guards on Wednesday from entering Afghan university campuses, a day after the nation’s Taliban rulers banned them from higher education.
Despite promising a softer rule when they seized power last year, Taliban have ratcheted up restrictions on all aspects of women’s lives, ignoring international outrage.
A team of AFP journalists saw groups of students gathered outside universities in the capital, Kabul, barred from entering by armed guards and shuttered gates. Many, dressed in hijabs, were also seen standing in groups on roads leading to the campuses.
“We are doomed. We have lost everything,” said one student, who asked not to be identified. Men students also expressed shock at the latest edict.
“It really expresses their illiteracy and low knowledge of Islam and human rights,” said one, also asking not to be named.
“If the situation continues like this the future will be worse. Everyone is scared.”
Most private and government universities are closed for a few weeks over winter, although campuses generally remain open to students and staff.
The decision to bar women from universities came late Tuesday in a terse announcement from Neda Mohammad Nadeem, the Minister for Higher Education. “You all are informed to immediately implement the mentioned order of suspending education of females until further notice,” it said. Washington condemned the decision “in the strongest terms.”
“The Taliban cannot expect to be a legitimate member of the international community until they respect the rights of all in Afghanistan. This decision will come with consequences for the Taliban,” Secretary of State Antony Blinken said in a statement.
UN Secretary-General Antonio Guterres, meanwhile, was “deeply alarmed”, his spokesman said Tuesday. “The secretary-general reiterates that the denial of education not only violates the equal rights of women and girls, but will have a devastating impact on the country’s future,” Stephane Dujarric said in a statement.
The ban on higher education comes less than three months after thousands of girls and women were allowed to sit for university entrance exams across the country, with many aspiring to choose teaching and medicine as future careers.
Most teenage girls across the country have already been banned from secondary school, severely limiting university intake anyway.