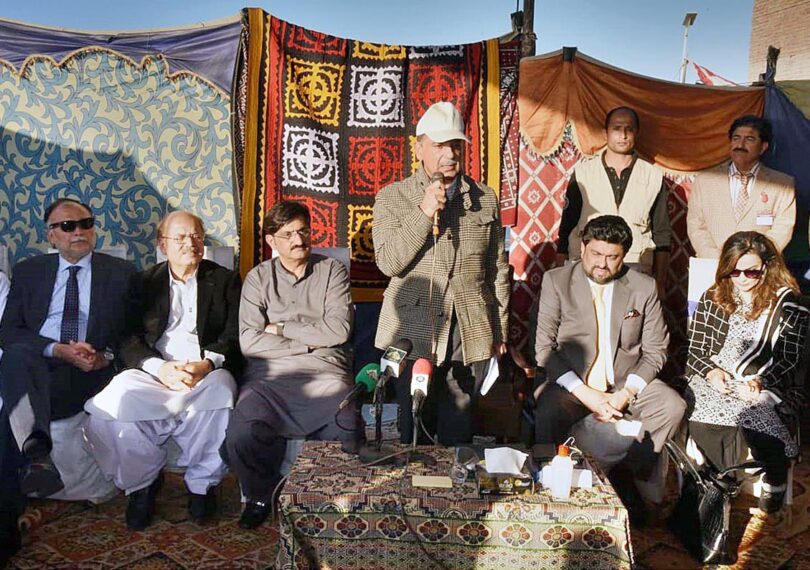 KHAIRPUR (APP): Prime Minister Shehbaz Sharif on Wednesday said the Federal Government would not leave the flood-affected people of Sindh in distress and would continue to take measures to mitigate their sufferings. The prime minister, during his visit to Pir Guddu and Kot Diji towns of the flood-affected Khairpur district, inspected the post-flood rehabilitation work.
PM Shehbaz, in his address to the flood victims, said the people of Sindh suffered from loss of life and property as the floods had wreaked havoc in the province. The Federal Government, he added, provided the utmost resources to the provincial government to overcome the massive problem.
Under the Benazir Income Support Programme, the Federal Government disbursed Rs 70 billion to the flood victims, he added. Serving the masses and their welfare was the priority of the government, the prime minister said. Shehbaz Sharif said the rehabilitation and reconstruction work had been completed to a large extent, however, stressed that the de-watering of the inundated areas of Dadu required immediate attention. He said in the wake of floods, some 20 million people, including nine million children, were in dire need of assistance from the government, and it required billions of rupees to address the challenges of food and medicine.
PM Shehbaz mentioned that Pakistan was facing the brunt of climate change despite minimal contribution to the global carbon emissions. He lauded the overseas Pakistanis for contributing Rs 2.75 billion donations to the Prime Minister’s Flood Relief Fund, which, he said, would be spent transparently for the welfare of flood-hit people.
He assured the flood-struck people that the government would construct houses for their proper accommodation. He also announced the establishment of a campus of COMSATS University in Khairpur. The prime minister also met the flood-affected people at makeshift camps and inquired about the availability of facilities being provided to them by the government. Sindh Governor Kamran Khan Tissori said the coordination between federal and provincial governments was important in providing facilities to the flood-affected people who were facing the challenges of food security and accommodation.
Sindh Chief Minister Syed Murad Ali Shah mentioned the need for the availability of funds for redefining and clearing the natural water courses so as to minimize the chances of floods. He also sought the Federal Government’s assistance to help the province rectify its drainage system.
Prime Minister Shehbaz was given a briefing on the ongoing rehabilitation and reconstruction projects being carried out in the flood-affected areas. It was highlighted that the areas be restored in line with the feasibility study following a rainfall of 2011-12 that outlined the natural water courses. It was emphasized that most of the flood-hit areas had been de-watered, with electricity fully restored.
Planning Minister Ahsan Iqbal, Information Minister Marriyum Aurangzeb, Climate Change Minister Sherry Rehman, National Disaster Management Authority Chairman Lt Gen Inam Haider Malik and senior officials of the provincial government were present.

ISLAMABAD (APP): Prime Minister Shehbaz Sharif on Wednesday launched a plan of action named ‘Resilient, Recovery, Rehabilitation and Reconstruction Framework’ (4RF), which will be carried out in the flood-affected areas of the country. The copy of the 4RF report was presented to the prime minister by Ahsan Iqbal, Minister for Planning Development and Special Initiatives (MoPD&SI) here in a meeting.
Ahsan Iqbal apprised the prime minister that the document was based on the loss and damage estimated in the Post Disaster Needs Assessment report, which was launched in late October this year.
The 4RF document contained short- medium- and long-term climate resilient strategy.The prime minister appreciated the efforts of the Ministry of Planning Development & Special Initiatives, Development Partners, line ministries, National Disaster Management Authority, and the provincial governments for adopting a whole of Pakistan and inclusive approach in bringing out this important framework.
He congratulated the Minister and his team for their hard work.
The prime minister directed that necessary efforts must be made for effective pitching of this framework in the upcoming Development Conference, scheduled to be held on 9th January 2023 at Geneva, Switzerland.
He directed that Ministry of Planning in coordination with the Ministry of Foreign Affairs, Ministry of Climate Change and Economic Affairs Division may take necessary steps for effective dissemination of the document to all the stakeholders at home and abroad.Secretary Syed Zafar Ali Shah and other senior officials of Planning Ministry were also present in the meeting.