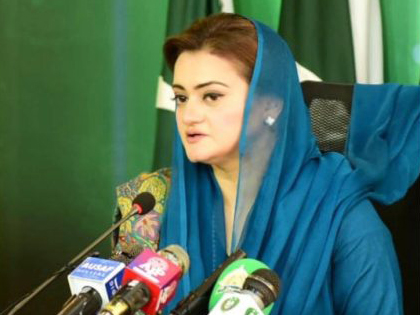 ISLAMABAD (APP): Minister for Information and Broadcasting Marriyum Aurangzeb on Wednesday strongly condemned the armed men’s attempt to enter into anchorperson Shiffa Yousafzai’s house and alleged torture of domestic workers. The minister telephoned Shiffa Yousafzai and informed her that the police were investigating the incident and have been directed to arrest the culprits as soon as possible.
The minister expressed solidarity with Shiffa Yousafzai and her family.
Shiffa Yosafzai told the minister that she was not present at home at the time of the incident.
“Suspects assaulted, threatened domestic workers and escaped,” Shiffa Yousafzai told the information minister. The minister said that such incidents would be prevented with collective efforts.
PM reviews flood rehabilitation activities in Khairpur: Marriyum: Minister for Information and Broadcasting Marriyum Aurangzeb Wednesday said Prime Minister Shehbaz Sharif reviewed the on-going efforts for the rehabilitation of flood-affected people in Khairpur, Sindh .
The prime minister was on a day-long visit to the area where a large number of flood victims were still facing challenges, she said in a tweet. PM Shehbaz was briefed by the National Disaster Management Authority chairman on the current situation and needs gap for rehabilitation efforts, she added while sharing the pictures of the
briefing.
Marriyum grieved over demise of Shireen Mazari’s husband: Minister for Information and Broadcasting Marriyum Aurangzeb on Wednesday expressed deep grief and sorrow over the sad demise of Dr Tabish, husband of Pakistan Tehreek-e-Insaf’s leader Shireen Mazari. In her condolence message, the minister said she was saddened to hear about the death of Dr Mazari’s husband. She prayed to Allah Almighty to rest the departed soul in eternal peace and grant courage to the bereaved family to bear this loss with fortitude.