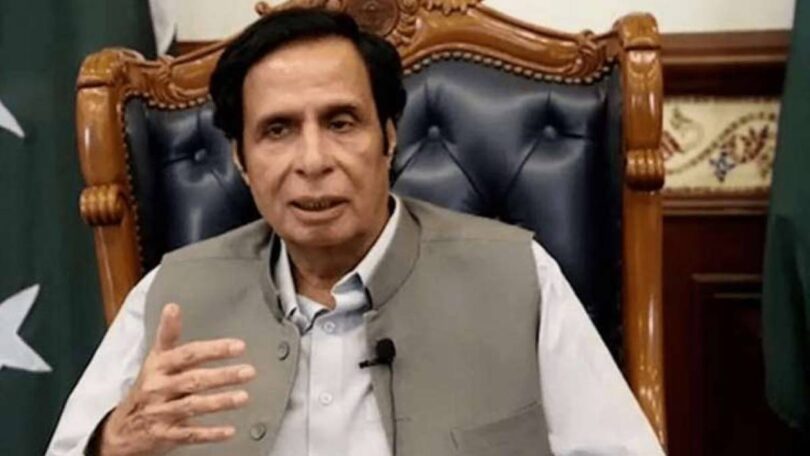 LAHORE (APP): Pakistani origin American businessman and leader of the Democratic Party Tahir Javed met Chief Minister Punjab Chaudhry Parvez Elahi at the CM Office on Sunday.
The guest appreciated the exemplary steps taken by the Punjab chief minister for well-being of the people of Punjab in a short span of time. He said that under the able leadership of CM Parvez Elahi, the Punjab government undertook five years work in just five months.
Tahir Javed acknowledged that Parvez Elahi had set a new example of rendering public service likewise his previous tenure. He said that declaring Punjab and American State California a ‘Sister State’ was a milestone step of CM Parvez Elahi and congratulated him on the initiative.
The CM said that the agreement to declare Punjab and California a ‘Sister State’ would promote trade, economic and business relations between Punjab and California. The CM highlighted that bilateral trade would enhance between Punjab and American State California, adding that relations in education, health, information technology, environment and culture sectors would also be promoted.
He said that the agreement would further augment bilateral relations between Punjab and California.
The CM lauded the Pakistani people residing in America for vigorously helping the flood- affectees and praised the philanthropists for generously giving their donations in the CM Flood Relief Fund.
He said that the Punjab government utilised the donated amount for rehabilitation and settlement of the flood- affectees in a transparent manner.
Parvez Elahi condemns Holy Quran desecration in Sweden: Punjab Chief Minister Chaudhry Parvez Elahi strongly condemned desecration of Holy Quran in Sweden. According to official sources here on Sunday, the chief minister said that desecration of Holy Quran was heartrending action. He said that no society could ever imagine of desecrating holy books and there was no room for such heinous action in any religion as well. He said that such an action in the garb of freedom of expression was not tolerable. Parvez Elahi said that the heinous action of Sweden had actually hurt the sentiments of Muslims living all over the world.” Respect of Holy Quran was an integral part of the faith of Muslims, he added.
CM condoles death of PA Secretary’s elder brother: Punjab Chief Minister Chaudhry Parvez Elahi visited the residence of Secretary Punjab Assembly Inayatullah Lak at GOR2 on Sunday.
He expressed his deep sense of sorrow with the secretary over the sad demise of his elder brother. He expressed his heartfelt sympathies and condolences with Inayatullah Lak and the bereaved family. He offered Fateha for the departed soul and prayed for grant of fortitude to the bereaved family.
The CM said that he was profoundly grieved over the death of the elder brother of Inayatullah Lak. He prayed that may Allah Almighty rest the departed soul in eternal peace and grant forbearance to the bereaved family to bear the irreparable loss.
Former Principal Secretary to CM GM Sikander and other officials were also present.