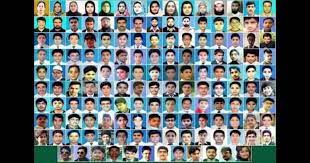 PESHAWAR : The survivor of horrific attack on the Army Public School (APS) Peshawar eight years had inspired many due to his indomitable courage, willpower and professional commitment by earning great name for the country’s within and abroad.

Ahmad Nawaz, a brave son of Peshawar, who survived APS massacre on December 16, 2014, has inspired many after becoming the youngest President of the prestigious Oxford University’s Union with a history going back to 1825. Born at the resident of Muhammad Nawaz at Peshawar, Ahmad Nawaz, who received multiple bullets wounds during APS horrific terrorist attack that claimed lives of around 150 students and teachers including its Principal Tahira Qazi, has recently comfortably won the Oxford University’s Union election after defeating his two opponents. Ahmad Nawaz brother Haris Nawaz was also killed in the deadly attack.

Ahmad Nawaz, who is a second-year Philosophy and Theology student from Lady Margaret Hall of the Oxford University, has secured 517 votes against Anjali Ramanathan 422 votes and Rachel Ojo 187 votes. “Ahmad Nawaz is a symbol of indomitable courage, willpower and brave son of Pakistan. His success in the oxford university’s union election showed that every goal can be achieved with a strong determination, belief in own abilities and willpower,’ said Manzoorul Haq, former Ambassador of Pakistan while talking to APP.

Despite brutal killing of his younger brother Haris Nawaz in the APS’s horrific incident, he said the 23-years-old Peshawari son had stood up and continued his inspirational journey fueled by great mental strength and character, which led to his great achievement in a very young age. Following appeal of his father Muhammad Nawaz, the critically injured Ahmad was shifted to Queen Elizabeth Hospital Birmingham, London by the then Prime Minister Mian Muhammad Nawaz Sharif on February 12, 2015.

The then PMLN Government had also provided Rs 30.6 million to his father for abroad treatment of his son. Following successful surgeries at Lady Reading Hospital Peshawar and London based hospital, Ahmad’s obtained admission at historic Oxford University where he presently studied at Philosophy and Theology and quickly made their mark.

Ambassador Manzoor, who served as Deputy High Commissioner of Pakistan at UK said Ahmad has earned great name for Pakistan and set a unique example of indomitable courage, willpower and determination not only for the entire youth of Pakistan but also abroad. He said “we need to focus on character of our students in educational institutions so that they can meet any challenge.”

Ikhtiar Wali Khan, member provincial assembly said election of Ahmad Nawaz as President of the Oxford’s university union was a great honour for Pakistan especially for Peshawar. Ahmad was a role model for students of Pakistan. He said his spirited courage showed that everything can be achieved in life if someone’s his a willpower, motivation, belief in own abilities and stick to his goals.

Ikhtiar Wali Khan said that Nawaz’s historic win had impressed people of all walks of life in Pakistan and oversees. He said that former Prime Minister Muhammad Nawaz Sharif also deserved credit and appreciation for providing a substantial financial assistance to the tune of over Rs30.6 million for treatment of Ahmad’s and issued passports to his family to accompany him in London on emergency basis, thus saving his life. He said Ahmad’s success showed that Pakistanis was a strong nation and can come out of every difficult situation. He expressed the hope that Ahmad Nawaz would fulfill his new assignment with best of his abilities and in a professional way. (APP)