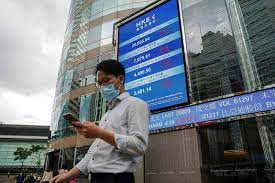 HONG KONG (APP): Asian markets resumed their strong start to the year Monday, tracking a surge on Wall Street fuelled by hopes that US data will allow the Federal Reserve to slow its pace of interest rate hikes. All three main indexes in New York soared more than two percent Friday after a closely watched report showed a forecast-busting rise in new jobs but a slowdown in wages growth.

That came as separate figures showed a shock contraction in the crucial services sector — the first since spring 2020 at the height of the pandemic.

The readings, while suggesting the world’s top economy was showing signs of weakness, were seized on by traders hopeful that the Fed will begin to temper its monetary tightening campaign.

Investors are now betting officials will lift borrowing costs about 25 basis points at their next meeting at the end of the month.
However, policymakers have warned that rates will continue to go up as they aim to bring decades-high inflation under control, with some saying they will not likely be cut until 2024.

In a further sign of hope, data Friday showed eurozone inflation slowed for a second month in a row in December, to 9.2 percent — the first time in single digits since September.

Asian equities started the day on the front foot, with Hong Kong up more than two percent and Shanghai also well up.
Traders in the two cities have been on a high at the start of the year as they welcome China’s emergence from zero-Covid as well as pledges to help the struggling economy, particularly the property sector.

The borders between Hong Kong, Macau and China were partially opened Sunday, providing a much-needed boost to the city. Macau-based casinos surged on the move.

“The U-turn in China’s Covid policy is consequential to growth and equity returns,” said SPI Asset Management’s Stephen Innes.
“So with the lifting of border restrictions between China/Hong Kong/Macau and international travel reopening, local travellers are not only in a celebratory mood but also investors.”

Easing expectations about US rates were also weighing on the dollar, which extended Friday’s retreat against its major peers.
Oil prices rose, having plunged around eight percent last week on demand concerns caused by a spike in Covid infections in China as containment measures are lifted.

However, while the commodity is now at more than a one-year low, observers say it could rally again as China reopens and the global economy recovers.

“I think oil will go upwards of $140 a barrel once Asia fully reopens, assuming there will be no more lockdowns,” said hedge fund manager Pierre Andurand. He added that the “market is underestimating the scale of the demand boost that it will bring”.