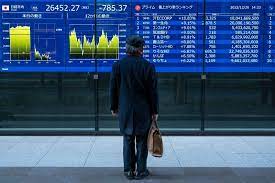 HONG KONG (AFP): Markets fell in Asia on Tuesday and the yen rallied after Japan announced a surprise tweak to its ultra-loose monetary policy, just as traders were fretting that central bank efforts to tame inflation will tip economies into recession.

Sentiment was also being weighed down by a spike in Covid infections in China as officials roll back many of the strict containment measures that have been in place for almost three years.

A so-called Santa rally appears to be eluding investors, with the mood dampened by last week’s warnings from the Federal Reserve and European Central Bank that they will likely push interest rates higher than expected next year.

The remarks dealt a blow to a short rally across equities that had been fuelled by data showing inflation coming down.
Adding to the selling pressure were comments from former New York Fed chief William Dudley, who told Bloomberg Television that any sign of optimism in markets could make monetary policymakers tighten even more.

Tokyo sank more than two percent after the Bank of Japan adjusted its parameters for controlling bond yields, in a shift away from its long-running dovish stance of keeping rates ultra-low to boost the struggling economy.

Inflation in Japan has risen sharply this year, with the consumer price index in October at 3.6 percent, the highest in four decades, though bank boss Haruhiko Kuroda and other officials have said that would be temporary, citing a lack of strong demand and wage rises. The move sent the yen to just above 133 per dollar, its strongest level since August.

The Japanese unit has been hobbled this year by the BoJ’s determination to stick to its loose monetary policy — hitting a 32-year low of around 150 to the dollar in October — even as the Fed ramped up borrowing costs.

“This was bound to happen with inflation rising in Japan, it’s just happened sooner than many thought,” Amir Anvarzadeh, of Asymmetric Advisors, said. “It could spark money flowing back into Japan.”

“Those who were in the camp of a year-end rally are now second-guessing their investment thesis,” said JC O’Hara of MKM Partners.
“The markets may have placed a little too much faith in Santa Claus and the rally he typically brings.”

With few catalysts to drive trade, investors are winding down for the Christmas break, though they are keeping a close eye on developments in China, which is suffering a sharp jump in Covid cases.

Officials in recent weeks have started to move away from their rigid zero-Covid policy of lockdowns and mass testing following widespread protests.

And while the shift has been welcomed as a much-needed boost to the world’s number-two economy, there is growing anxiety about the immediate impact on businesses and the healthcare system.

Still, the expected pick-up in demand from the China reopening continues to support commodity prices, with both main oil contracts up more than one percent, extending Monday’s gains.

The impact of Covid and weaknesses in the country’s vast property sector led the World Bank on Tuesday to slash its China growth forecasts to 2.7 percent this year, from 4.3 percent predicted in June. It also revised its forecast for next year from 8.1 percent down to 4.3 percent.