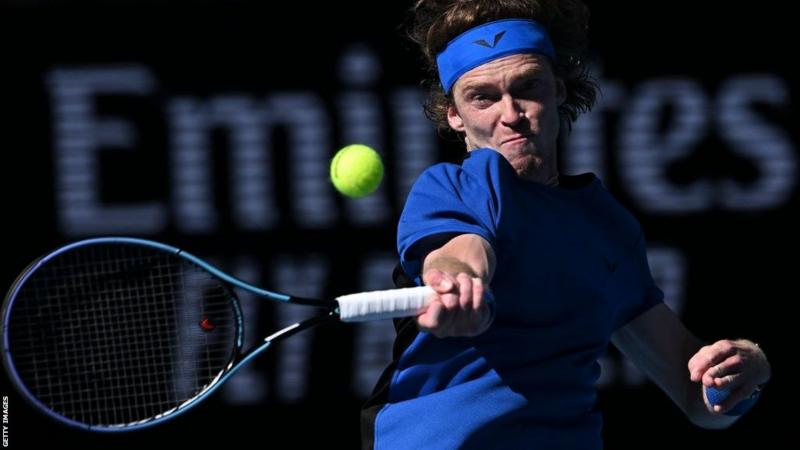 MELBOURNE (Agencies): Novak Djokovic made light work of home hope Alex de Minaur as he continued his pursuit of a record-extending 10th men’s title at the Australian Open.

The fourth seed will play Russian Andrey Rublev in the quarter-finals.
Rublev, seeded fifth, saved two match points – and fought back from 5-0 down in a final-set tie-break – to beat Danish teenager Holger Rune.

Later on Monday, the 25-year-old discovered he would face Djokovic after the former world number one had too much quality for 22nd seed De Minaur.
On the prospect of facing Djokovic, Rublev joked: “No-one wants to face Novak, I want to be in the other half of the draw.”

Djokovic has been wearing strapping all tournament to protect a hamstring injury and asked for treatment in a medical timeout during his third-round win over Bulgaria’s Grigor Dimitrov. But, despite the concerns of his fans, he moved freely in a confident win against De Minaur, which took two hours and six minutes.
“I kept my focus all the way through to play my best match of this year so far,” said Djokovic.

“Tonight it wasn’t obvious I was dealing with an injury. I didn’t feel anything today, today was great.”

De Minaur, who became the final Australian player to fall in the singles, was unable to cope with Djokovic’s quality and precision from the baseline. Rublev should provide a sterner examination – of Djokovic’s fitness and his incredible record at Melbourne Park – when the pair meet on Wednesday.

Djokovic infamously did not play last year after a row about his vaccination status which led to court hearings and his eventual deportation.

On his return, he has continued from where he left off at what he calls his “second home”, extending his winning streak there to 25 matches.

As well as a 10th Australian Open, Djokovic is going for a record-equalling 22nd men’s Grand Slam title.

Rune served for the match at 5-3 in the final set and then had two match points on Rublev’s serve when 6-5 up.

The Russian ultimately got over the line with a fortunate net-cord winner. “It’s not a rollercoaster. A rollercoaster is easier,” said Rublev after his win. “I was 5-2 down in the fifth set, 6-5 two match points and then 5-0 in a super tie-break. This is the first ever time I win a match like this.

“To be in the quarter-final is something I will remember for sure all my life. I have no words man, I am shaking.” Rublev looked to have taken control when he led by two sets to one and created three break points in the opening game of the fourth set moments after Rune had his heart-rate checked by medical staff.

But Rune fought back to take the fourth and then broke early in the decider. From 5-3 down, Rublev won eight straight points to level up again but Rune again wrestled back the momentum, getting two match points on Rublev’s serve only for the Russian to force a 10-point tie-break.

Rune raced into a 5-0 and 7-3 lead but was unable to build on his strong start as Rublev levelled at 7-7 before converting his third match point as the ball clipped the net and dropped on to Rune’s side of the court.

Ben Shelton said his Australian Open “has been a dream” after he beat fellow American JJ Wolf in another thrilling five-setter.

The 20-year-old son of former world number 55 Bryan Shelton is playing in only his second Grand Slam. The left-hander was ranked 569 in the world last year but has risen to 89. “It’s been a dream so far, it’s been a real pleasure playing on John Cain [Arena],” he said.

“Thanks to everyone who came out the last two matches, it’s been amazing – you guys are the best.”

Unseeded Paul is also into his first Grand Slam quarter-final having lost in the second round in his past two visits to Melbourne. Bautista Agut had been involved in a lengthy four-set match with Britain’s Andy Murray in the third round.