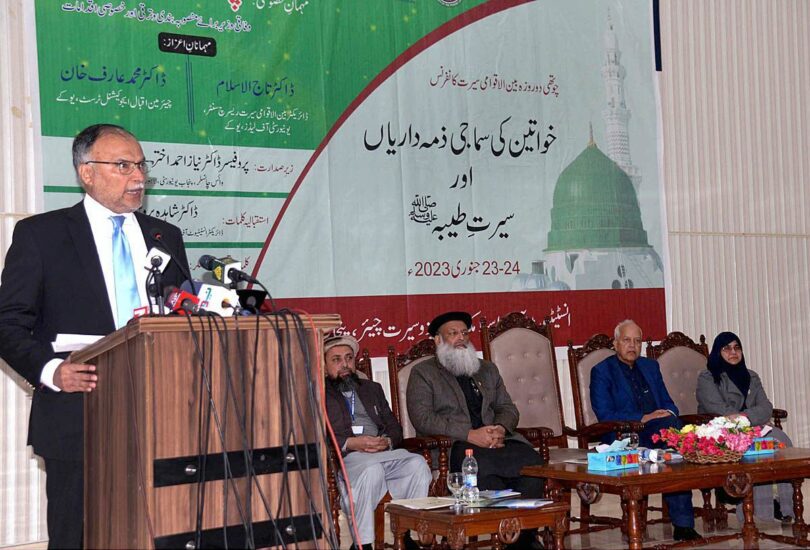 LAHORE: Federal Minister for Planning, Development and Special Initiatives Ahsan Iqbal said on Monday that Muslims had to meet their challenges by seeking guidance from the sacred life of Holy Prophet (Peace Be Upon Him) which was a beacon for entire humanity.

Addressing an inaugural session of a two-day International Seerat Conference on ‘Social Responsibilities of Women and Seerat-e-Tayyaba (PBUH)’ here at Punjab University, he said the sacred life (Seerat-un-Nabi) of Holy Prophet (PBUH) had introduced those golden principles which had not only enlightened people in Arab but also Europe, Africa, Asia and Morocco to Indonesia.

Ahsan Iqbal said: “The glorious teachings of last Prophet Hazrat Muhammad (PBUH) are interpretation of the commandments of Allah Almighty.” He said: “Our forefathers had practiced the golden principles taught by our beloved Holy Prophet (PBUH) in letter and spirit which helped them in becoming world superpower.”
He said non-Muslims deeply studied factors behind the power which Muslims experienced as a result of following the Holy Seerat-un-Nabi (PBUH).

The message and vision of social justice given by the Holy Prophet Hazrat Muhammad (PBUH) was unprecedented and matchless that helped Islam to grow rapidly, he added.

He said it was a high time to think, why today Muslims were not benefiting from the holy Seerat-un-Nabi (PBUH) which in past led to social, political and economic revolution and the reason was only lack of implementation.

He said, “Islam has given identity, respect and status to women and there are a number of Hadees Sharifs which prove the importance of women.”

The Minister said that unfortunately visionary progress of Muslims halted after Baghdad fall which negatively impacted the leadership approach of Muslims.
He said that Shariat given to the Holy Prophet Hazrat Muhammad (PBUH) would provide guidance to entire humanity till the day of judgement.

Ahsan Iqbal said that human had gone through different stages of evolution and today we were in the age of knowledge revolution.

Industrial revolution changed the power parameters and instead of muscle power, brainpower gained more significance, he said and added that the age of brainpower actually ended the division between man and woman.

He said there was a need to harmonize thinking in accordance with the age of industrial and knowledge revolution.

He said, “It is unfortunate that we have never accepted innovation and there is a need to promote approach of critical thinking among our people.”

He said that Seerat chairs were established in 2017 on contemporary issues with an objective to achieve success in different sectors of life. He said Islamic Seerat Centre on Gender Studies was being established which would soon be completed.