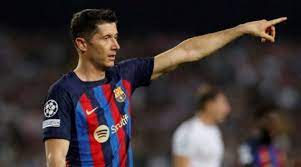 BARCELONA (Reuters): Striker Robert Lewandowski will be available for Barcelona s match against Espanyol after a Spanish court overturned his suspension, the LaLiga leaders said on Friday.

Lewandowski was set to miss the match after the Spanish soccer federation (RFEF) banned the Poland international for three games following his sending off in Barcelona s 2-1 win at Osasuna in November.

The 34-year-old was shown a yellow card for dragging back Nacho Vidal in the 11th minute and 20 minutes later received his second after appearing to elbow David Garcia in the face.

According to the RFEF Officiating Committee, Lewandowski was given a three-game ban due to a gesture towards the official after he was shown the red card that was of “contemptuous attitude towards the referees”.

Last month, Barcelona said they would appeal the ban. According to reports in Spanish media, their appeal was rejected by the Court of Arbitration for Sport (CAS) earlier this month.

“The dispute settlement court in Madrid issued a precautionary measure against the suspension imposed by the court of arbitration for sport, meaning the Polish international will be able to line up against Espanyol,” Barcelona said in a statement.

Barcelona, who have a two-point lead over Real Madrid at the top of the table after 14 games, host city rivals Espanyol on Saturday.