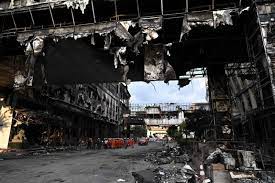 POIPET, Cambodia (Reuters): Cambodian rescue teams recovered eight bodies on Friday from the charred rooms of a casino-hotel where a fire killed at least 27 people a day earlier, with more than 20 people still missing.

About 400 employees and patrons were in the Grand Diamond City casino and hotel in Poipet, a town on the Thai border, when the fire broke out in the early hours of Thursday, leaving the building gutted by the afternoon.

It was unclear what started the blaze but Sek Sokhom, head of the Banteay Meanchey provincial information department, said it may have been due to an electrical short circuit. A government committee has been set up to investigate the cause.

Prime Minister Hun Sen on Friday expressed condolences for the victims and their families, and urged authorities to improve fire safety and response times.

Safety standards in Cambodia and other parts of Southeast Asia can be well below international standards and poorly enforced.

Rescue teams said they had to move slowly through the smoldering remains of the building in case it collapsed.

Many of the victims were Thai, rescue workers said, and dozens of injured people were taken over the border to the Thai province of Sa Kaeo for treatment.

A key part of Cambodia’s tourism industry, casinos in the capital of Phnom Penh and on the borders with Vietnam and Thailand are a draw for visitors from Asian nations that ban gambling.

Those in Poipet are hugely popular with short-term Thai visitors as gambling is illegal across the border and unlicensed casinos operate underground there.