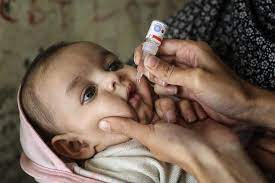 A 5-day anti-polio campaign has been started across the country. Pakistan is one of the few countries in the world where polio is still attacking infants despite the continuous and rigorous efforts of the government and its global partners.

Although the nation succeeded in reducing the number of polio cases from 20,000 to a few dozen annually, still infections are recurrently occurring in various parts of the country and it has a long way to completely eradicate the disease from our soil.

Presently, Pakistan’s failure to control this epidemic has become a stigma for the entire nation, however, the Pakistani government, and its global partners including UNICEF, the Rotary Club, Bill, and Malinda Gate Foundation, and other charitable organizations are hopeful to achieve their target through concerted efforts, public awareness, and imposition of regressive anti-polio measures across the nation.

In fact, the Immunization of children is a national and parental duty and every citizen must play his role in the accomplishment of this collective task, so Pakistan can proudly join the club of polio-free nations as early as possible.