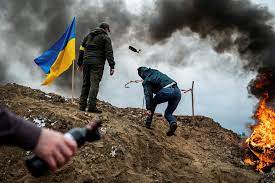 According to the media, German Chancellor Olaf Scholz is under immense pressure from the European allies to approve an increase in international military support for Kyiv by allowing the export of Leopard 2 battle tanks to Ukraine. Whereas, the German Chancellor is a bit hesitant that such action might trigger a wider conflict that engulfs Berlin and become disastrous eventually.

Russia-Ukraine Conflict has entered its second calendar year by marking 330 days with no sign of any pause and compromise as hostility is fueling relentlessly, while no direct or indirect diplomacy exists between the parties so far. The combatant militaries are using lethal arms and ammunition coupled with highly destructive war maneuvers that are causing irreparable losses to both nations. Over the past weeks, the Russian military faced multiple strategic setbacks, and Kiyv lost the important town of Suledar to Russians while a fierce battle is ongoing to gain control over strategically important city of Bukhmut. Recently, Russia has deployed a large number of its troops and heavy military equipment in Belarus, apparently to conduct a joint military drill on the Ukrainian border which prompted immense fear in western nations that Russia might launch another offensive against Kiyv from Belarusian border and Ukrainian security forces might not be able to sustain that attack. Western Strategists have suggested the provision of heavy military equipement including tanks and airplanes to strengthen Kiyv’s defense.

Recently, UK’s Rishi Sunak has announced sending a squadron of Challenger tanks to Ukraine while NATO nations are stressing the German government to scale up its military assistance to Ukraine by providing its most advanced Leopard 2 all-weather multi-terrain main battle War machine but so far Scholz government is reluctant to the proposal due the fear that the rivalry might not drag west into the war and a wider conflict kicks off between NATO and Russia. Meanwhile, the European Union has released Euro 3 billion in emergency aid to Kiyv to support the country’s financial stability and help manage its public sector expenditures amid freezing winter in Eastren Europe.

Presently, a largescale Russian offensive agaisnt Ukraine is expected in the Spring which might come from the Belarus-Ukraine border, from Donbas Oblast, and South Western Kherson region as nearly three hundred thousand Russian troops had been trained for the proposed operation, which is likely to be unleashed in the coming months. Along similar lines, the Ukrainian military is also preparing to take back its lost territories and NATO allies are providing economic and military support to Kiyv to garner a collective victory through joint efforts. Western allies intend to launch a decisive campaign agaisnt Putin’s regime by providing modern tanks, airplanes, and long-range missiles but at the same time west desires to keep itself at arm’s distance from the war blazes to keep its industrial wheel running and the economy booming.
A stage is set and game planners have gathered fuel and fizz to wage a deadly war. Some use mercenaries others use hired guns but Ukrainians will pay the price in their blood. Prospects of peace are very bleak as no aggressor is ready to alter his course thus world should be ready to experience annihilation and affliction at least in the current year.