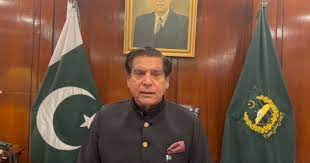 In his message on the 15th death anniversary of Mohtarma Benazir Bhutto, the speaker said Mohtarma had the unique distinction of becoming the first-ever female prime minister of a Muslim nation on December 1, 1988. She won this distinction due to her political acumen, persistent struggle and leadership qualities.

He said Benazir Bhutto launched a peaceful struggle for the restoration of democracy and supremacy of the Constitution of Islamic Republic of Pakistan. She endured the hardships of jails sans compromising on principles.

Benazir was a strong voice for the oppressed farmers, labours and neglected segments of society.

Speaker said December 27, the martyrdom day of Benazir Bhutto will be remembered as a tragic day in the country’s history. The void created due to the martyrdom of Benazir in Pakistan’s politics will not be fulfilled.

National Assembly Speaker said that Benazir Bhutto remained steadfast in her mission until her martyrdom.

Her mission was the establishment of a vibrant democratic system and a society based on equality that too in accordance with the thoughts and ideas of the Quaid-e-Azam Muhammad Ali Jinnah as well as the mission of Quaid-e-Awam Shaheed Zulfikar Ali Bhutto.
Speaker said that Ms. Benazir Bhutto was a great and exemplary leader, she played an exemplary role in the restoration of democracy with courage and bravery and gave political, social and educational awareness to the people.

Speaker Raja Pervez Ashraf said that despite all the difficulties, she struggled to strengthen institutions, supremacy of the constitution and harmony among the federation and the provinces.

The Speaker said that after the martyrdom of Mrs. Benazir Bhutto, the role played by Pakistan People’s Party Chairman and former President Asif Ali Zardari and Foreign Minister Bilawal Bhutto Zardari for the stability of democracy in the country, harmony between the federation and the provinces is commendable.

He paid tribute to Chairman of People’s Party Bilawal Bhutto Zardari and said that under the leadership of Bilawal Bhutto, the party was pursuing the mission of martyred Ms. Benazir Bhutto’s mission. The day is not far when all of us will be able to get the country out of the challenges it is facing. (APP)