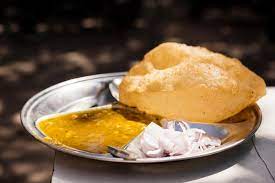 Train journeys have long been intimately connected with food, taking us through India’s diverse cultures and cuisines even as we head towards our destination. If you’ve stocked up on theplas packed in foil, and are planning to make do with the samosas and little cups of tomato soup sold on-board, allow us to take you on a gastronomic journey. Here are 20 of the best Indian foods that railway stations across the country have to offer, according to the IRCTC.

Fair warning: reading this article will make you feel very hungry, maybe just enough to go ahead and book tickets for your next train journey?

What’s a trip to Assam without sampling the state’s finest tea? Lal Chah gets its name because of its typical reddish-brown hue. It is a simple Assam black tea, brewed with no milk, and flavoured with liberal helpings of sugar, spices and lemon juice. Lal Chah is easily available at local tea shops at and near Guwahati Railway Station, a must-try beverage for weary passengers.

Slow-cooked baby potatoes in a rich, spicy gravy, aloo dum is a traditional favourite across many parts of India. Kharagpur Junction in West Bengal  is famous for its aloo dum, with passengers making it a point to savour the dish even in the middle of busy journeys. It is reasonably-priced, and is extra delicious when paired with aloo puris, also available at the station. Don’t hesitate to request more masala for an extra kick of flavour!