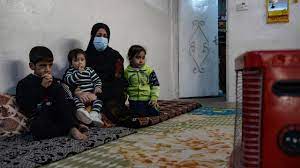 MOSUL (AFP): Married for over a decade, Alia Abdel-Razak is one of a million Iraqis deprived of crucial civil status documents, often caught in legal limbo in a country paralyzed by bureaucracy and the ravages of war.

The 37-year-old has to overcome countless hurdles just to get her children into school, and she cannot register her family to obtain the food subsidies she and her husband so desperately need.

A mother of four, Abdel-Razak relies on a pro-bono lawyer from aid group the International Rescue Committee (IRC) to help her navigate the labyrinthine processes required to get her papers in order.

Like many others, she struggles with endless red tape — but also the fallout from the country’s gruelling battle to defeat the Daesh group — to obtain documents like marriage and birth certificates.

Her dilapidated Mosul apartment bears witness to her daily struggle, with its bare concrete floors and broken windows patched up with cardboard.

She was married in 2012 and gave birth to her first daughter a year later.

But in 2014, Daesh seized Mosul and declared it the capital of its “caliphate,” driving out local officials in favor of their own administration.

The absence of civil status documents obstructs access to basic services such as “education, health care, and social security benefits,” according to the United Nations refugee agency UNHCR.

It can also “lead to restricted freedom of movement, increased risk of arrest and detention,” the agency says.

Abdel-Razak’s lawyer has launched a legal process to have her marriage and children officially recognized, with a decision expected in January.

In the meantime, they have scored one small victory — at nearly 10 years old, her firstborn Nazek has just joined school for the first time.

But to obtain some of the documents requested by the judge, it took three visits just to get the intelligence services’ seal on some papers.

One major hurdle has been the fact that her jailed brother is accused of having ties with Daesh.

According to the UN, one million Iraqis are living with at least one missing civil status document in a country still struggling to recover five years on from Daesh defeat back in 2017.

Marriage contracts agreed under the militant group’s rule have yet to be recognized, along with the children born out of these unions.

On top of that, many of the civil bureaus that kept such documentation on record were destroyed when Daesh rose to power or in the years-long battle to drive the militants out, according to the spokesman for the Ministry of Migration and Displaced Persons.

In cooperation with the interior ministry, his ministry coordinates mobile missions in camps to allow displaced people to obtain their missing documents, Ali Jahangir said.

IRC communications coordinator, Jordan Lesser-Roy, pointed to the work of non-governmental organizations in raising awareness among state bodies and reducing the waiting time for such paperwork.

“You need mayoral approval for these processes… and then of course you need policy change,” she said, calling for budget increases to the Civil Affairs Directorate and for more “mobile missions.”

In a report published in September, aid groups including the IRC pointed to the added complexities faced by families “with perceived Daesh affiliation.”

To obtain a birth certificate, mothers must provide DNA samples from up to three male relatives, and these documents can only be obtained in Baghdad.

They must also provide “evidence of the whereabouts of the child’s father in the form of a death certificate or evidence of incarceration.”

This is “an impossibility for many households where the head of household died or disappeared during the conflict,” according to the report.

Hussein Adnan, 23, lost his ID card while fleeing the battle against Daesh in 2017.

He was subsequently arrested and spent five months in detention before he was declared innocent.

He was married and had a son under the Daesh reign.

With the help of an IRC lawyer, Adnan was able to obtain a divorce after having his marriage and his six-year-old recognized, though he has yet to obtain a birth certificate for his son.

The process was further complicated as his ex-wife remarried and became pregnant again in the interim.

He was “beaten and tortured” while in detention and, despite family pressure to work, he remains frozen by fear of another arrest.

“I can’t work or go anywhere… I’m staying at home until my ID card is issued,” he said.