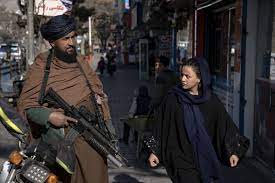 KABUL (ToloNews): The Biden administration is grappling with how to respond to new restrictions by the Islamic Emirate on women’s rights in Afghanistan, knowing that punishing the ruling administration risks rupturing the limited relationship the United States has with them, Politico reported on Saturday.
The discussion among administration officials is fluid and positions have varied depending on the proposed penalties, Politico reported, quoting a current administration official and a former US official familiar with the talks.
“Those proposals include new economic sanctions and tighter bans on Taliban leaders’ travels abroad, as well as limiting certain types of humanitarian aid to Afghanistan,” the report said.
In broad terms, according to the current and former officials, the debate has pitted Tom West, the US special representative for Afghanistan, against Rina Amiri, the US special envoy for Afghan women, girls and human rights, the report added. The report said that the West is “wary of going too far in isolating the Taliban, with whom the US tries to cooperate on counter-terrorism, while Amiri wants to get tougher on them as they try to erase women from public life.”
But the Islamic Emirate said the international community should engage in talks with Kabul.
“It is better to pursue engagement and negotiations to take us to the solution of the issues. Based on the bitter experience of the past, Washington should consider engagement,” said Bilal Karimi, deputy spokesman for the Islamic Emirate.
Analysts said that there will be some changes in the Islamic Emirate’s policies if there is pressure on it from the international community. “If they really impose sanctions and put pressure, it is possible that the Taliban will bring changes in their policies, particularly in the field of human rights, women’s rights and education,” said Aziz Maarij, a former diplomat.
This comes as the USAID Afghanistan Mission Director, Sean Callahan, said on Twitter that “women are central to our work in Afghanistan.”
“Afghan women must be able to earn an income, freely work, and fully participate in society,” Callahan said, adding that in cooperation with Roots of Peace, the USAID trained 150 women potato farmers.