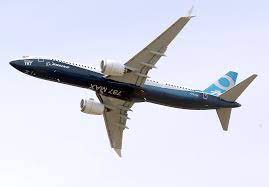 DALLAS, Texas (AP): A federal judge has ordered Boeing Co. to be arraigned on a felony charge stemming from crashes of two 737 Max jets, a ruling that threatens to unravel an agreement Boeing negotiated to avoid prosecution.

The ruling by a judge in Texas came after relatives of some of the victims said the government violated their rights by reaching a settlement with Boeing without first notifying the families.

US District Court Judge Reed O’Connor ordered Boeing to send a representative to his courtroom in Fort Worth Jan. 26 for arraignment.

Paul Cassell, a lawyer for relatives of some of the 346 people killed in the crashes, said, “The families look forward to addressing the company responsible for their loved ones’ deaths at the hearing next week.”

A Boeing spokesman said the company had no comment. The Justice Department, which fought against re-opening the settlement, did not immediately comment.

O’Connor ruled last year that relatives of those killed in the crashes are crime victims under federal law and should have been consulted before the Justice Department agreed to a deal under which Boeing paid $2.5 billion to avoid prosecution on a criminal count of defrauding federal regulators who approved the 737 Max.

Most of the money from the settlement went to airlines that couldn’t use their Max jets for nearly two years after the planes were grounded worldwide. Boeing agreed to pay a $243.6 million fine and create a $500 million fund to compensate victims’ families.

The first passenger flight of a Max took place in May 2017. The crashes occurred in October 2018 in Indonesia and less than five months later in Ethiopia.

On both planes, an automated flight-control system that Boeing did not initially disclose to airlines and pilots pushed the nose down based on a faulty reading from a single sensor on the fuselage. The Federal Aviation Administration cleared Max jets to resume flying in late 2020 after Boeing redesigned the flight system.

The crashes led to congressional investigations that harshly criticized both Boeing and the FAA. Congress made changes in how the FAA will certify planes in the future.